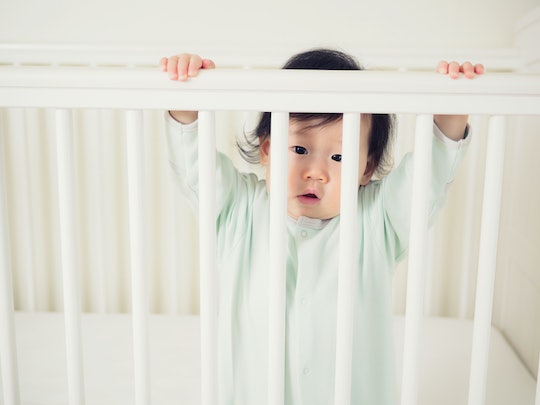 How To Transition Your Baby From A Bassinet To A Crib

The sleep options for babies seem infinite these days, from bed-sharing to co-sleeping to cribs to bassinets. If you've chosen a bassinet for your little one, there will come a time when you'll need to move them into a larger sleeping environment. Change isn't always easy when it comes to babies and their schedules, though, as any sleep deprived parent will tell you. Thankfully, experts have outlined how to transition your baby from a bassinet to a crib so you're not left in the dark.

The most obvious one is size — a crib takes up a lot more space than a bassinet, so a bassinet can be easier in a smaller house. Their smaller size also makes bassinets more portable. In addition, many bassinets have a hood or cover that you can pull over while baby is sleeping. Bassinets are also easier to use for many parents. Their sides are lower, so you don’t have to lean over the rail to place baby inside.

Cribs, on the other hand, can be used for much longer — some even convert to toddler beds and can last for years. Bassinets have weight limits and usually can only be used for the first few months of baby’s life. Cribs are typically more expensive than bassinets as well, but since they last longer, the total investment is lower if you go straight to a crib.

The American Academy of Pediatrics (AAP) recommends that babies sleep in the same room as their parents for the first year of their life, noting a 50 percent decrease in the risk of Sudden Infant Death Syndrome (SIDS) when parents and babies co-sleep. So, even when you make the switch from bassinet to crib, it's advisable to keep the crib within arms reach of your own bed.

So if you're baby has grown too big for their bassinet and you're looking to transition them to a crib, it's important to keep in mind that Brooke Nalle, a Pediatric sleep consultant, says the transition from bassinet to a crib is harder on parents than on babies. She goes on to advise parents to begin the transition during naps that occur during the day, rather than try to change their sleeping environment all once at night. In other words, baby steps is the name of the game.

Some parents worry that by moving to a bigger crib their baby might feel lost in a larger space and, as a result, won't feel as secure and safe as they would in their familiar bassinet. If you're looking to recreate the feeling of the womb in order to comfort your baby during this transition, The Baby Sleep Site suggests parents swaddle their babies, or use a sleep sack, to give them that familiar feeing of comfortable closeness.

The Baby Sleep Site also suggests parents make the move slowly, and actually make time for their baby to grow accustomed to their crib by spending some time in it while they're awake. The site also suggests that mom sleeps on the crib sheets for a few nights, so baby has a familiar and comforting scent that can help them feel secure in their new sleep environment.

Transitioning from the bassinet to a crib is just one of many changes that your baby, and you, will have to navigate. Parents can make the process easier by offering plenty of love and cuddles, and by making sure that no matter where their baby sleeps their environment follows safe sleeping guidelines. In other words, take your time, keep your baby's crib bare, and you'll be sleeping soundly in no time. Maybe.