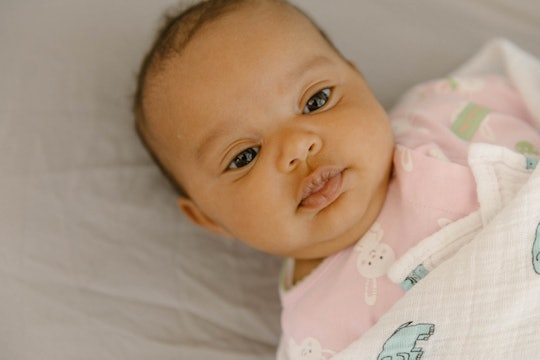 Everything You Need To Know About Treating Hand, Foot, & Mouth Disease In Babies

It's a truly disgusting childhood disease that, weirdly, I had never heard of until it swept our area a few years ago, leaving blistery, miserable kids in its wake. But if you have a baby and you're still learning how to treat sick kids, hand, foot, and mouth disease (HFMD) can be pretty scary when it pops up, so here are some pointers on how to care for your pimply infant if she gets hit with this relatively harmless illness. As you probably imagined, treating hand, foot, and mouth disease in babies can be tricky.

More Like This
Here's What You Need To Know If (When) Your Baby Eats Sand
Can Babies Drink Oat Milk Instead Of Cow's Milk?
Can You Sunbathe During Pregnancy?
How To Breastfeed Your Gassy Baby

HFMD is a common illness caused by several varieties of the Coxsackie virus and often shows up in schools during summer or fall, the American Academy of Pediatrics noted. Characterized by a high fever and blisters on, you guessed it, kids' hands, feet and mouths, the illness has an incubation period of up to six days before patients exhibit symptoms, according to the American Academy of Pediatrics. While it mostly affects kids ages 5 and younger, rumor has it that particularly virulent strains can wipe out entire high school football teams. Parents who haven't encountered it before can also contract it as it is highly contagious. That's because immunity to one Coxsackie virus doesn't necessarily extend to others, according to an article in The Bump. Gross.

The Centers for Disease Control and Prevention (CDC) details the first symptoms of HFM as a high fever, reduced appetite and a general feeling of malaise. A day or two later, small red bumps form on the body's hot spots and can often form painful blisters that inhibit eating and movement. However, these bumps can also appear in other locations, the CDC noted, like the knees, elbows, genitals, or backside.

Unfortunately, as far as treatment goes, there's really not much you can do besides relieve the symptoms. "It's painful," Dr. Jean Moorjani, a pediatrician at Orlando's Arnold Palmer Hospital for Children, tells Romper. "Everyone’s miserable and even people who don’t have it are miserable. And like with other viruses, there’s no medicine to make it go away; it has to run its course."

Controlling fever with fever reducers can also decrease pain from blisters, while numbing mouthwashes and sprays for the mouth — supplied by a pediatrician and administered with a cotton swab, the AAP advised — are encouraged so babies can swallow liquids to avoid avoid dehydration. Administer it about an hour before mealtimes to ensure it's kicked in to get some food and water down, The Bump noted.

"The biggest thing we worry about is if a child is having so much pain that they don’t want to eat and they get dehydrated," Dr. Moorjani says. "You can give them acetaminophen to relieve pain and feed them cold food like popsicles and smoothies. If they don’t take their usual sippy cup or bottle, maybe doing smaller amounts more frequently will be helpful."

According to The Bump, a baby should have a minimum of three wet diapers during their waking hours for parents to consider them hydrated enough to fight the illness.

Another tip from The Bump's article is to mix Maalox and Benadryl and coat mouth blisters with a cotton swab, a course of action Dr. Moorjani says can be helpful only after consulting with a physician. And don't forget to enforce plenty of rest, just like any other illness, so your baby can recover as quickly as possible. The good news is that most kids are already on the mend once their fever breaks, but be on the lookout for peeling skin or the loss of fingernails and toenails in the coming weeks. It's gruesome, but both painless and harmless.

According to the CDC, researchers are working on a vaccine for HFMD but currently, little ones just have to suffer through it. It's a difficult illness to prevent because patients spread it around to all their day care friends before anyone exhibits symptoms, making it really easy to take out an entire class or playgroup. Frequent hand washing, sanitizing of commonly used areas and toys, and avoiding contact with people who are actively suffering from HFMD are the most effective means of preventing the illness.