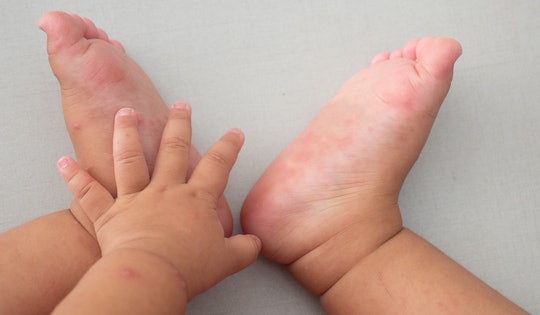 There must be something about mid-July that causes hand, foot, and mouth disease (HFMD) to go into overdrive. My 18-month-old came down with it last week, and I know other families, living in totally different states, who were hit with it at the exact same time. For those not familiar with HFMD, it's a viral infection that causes flu-like symptoms, along with sores on the hands, feet, face, and, most painfully, on the inside of the mouth. Since the virus is common in daycares, here's what you need to know about treating HFM in toddlers — because if your little one gets it, you'll want to do everything you can to make them more comfortable.

For my daughter, the first sign of HFMD was a high fever (just over a 100 degrees), followed by some throwing up. I suspected the common flu, but when little red bumps started showing up on her hands and feet a few days later, I knew that we were dealing with the dreaded Coxsackievirus. Coxsackie is the virus that causes HFMD, and it's most common in children under 10, according to WebMD.

So, what should you do if you suspect your child has HFMD? Unfortunately, there is no specific treatment for the virus, according to the Centers for Disease Control (CDC), but there are medicines you can administer to make your child feel more comfortable.

The CDC recommended using over-the-counter medications to help relieve pain and to reduce fever, but cautions against using Aspirin for children. I gave my daughter Children's Motrin and that definitely brought her fever down and seemed to perk her up a bit.

If your child has really bad mouth sores, Stephen Pishko, M.D., recommended in an interview with Parents, using a "one-to-one mixture of Benadryl and Maalox, to swish and spit, to help numb the mouth pain prior to mealtime." Your pharmacist can also compound this "magic mouthwash" for you.

The painful mouth sores associated with HFMD can make eating and drinking extremely painful, so serving your toddler soft, cold foods like popsicles and yogurt is a good idea. My little one only wanted smoothies. You'll also want to be vigilant about pushing plenty of fluids, since dehydration can be a complication of HFMD that requires a trip to the hospital.

"If a person has mouth sores, it might be painful for them to swallow. However, it is important for people with hand, foot, and mouth disease to drink enough liquids to prevent dehydration (loss of body fluids). If a person cannot swallow enough liquids to avoid dehydration, they may need to receive them through an IV in their vein," advised the CDC.

While you've got a sick kid on your hands, it can feel endless, but take heart— HFMD usually resolves on its own after about a week to 10 days, according to WebMD.

Plus, HFMD isn't prevalent all year-round. Coxsackievirus tends to peak in late summer and early fall, according to William Schaffner, an infectious diseases specialist at Vanderbilt University, in an interview with CNN. Since we're smack dab in the middle of HFMD season, make sure you're washing your hands thoroughly (especially after diaper changes) and taking care not to share utensils with your tot, since HFMD is spread through saliva and fecal matter, according to Healthline.

The CDC also advises against close contact (i.e. kisses and hugs) but I couldn't resist cuddling up my sick tot. Here's hoping I'm not the next to fall prey to HFMD.