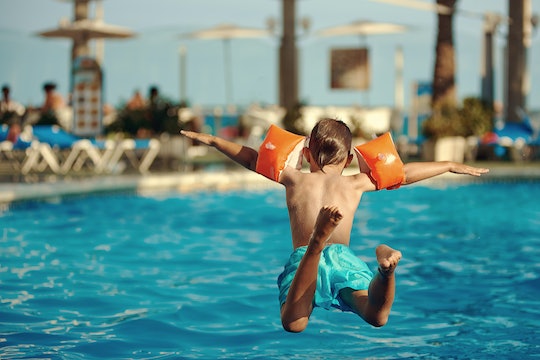 For busy kids who savor every minute of playtime, few things can keep them down. But swimmer's ear can pretty much ruin the party instantly. Knowing how to treat swimmer's ear in kids is crucial, because your little one might deal with this condition sooner or later. Unfortunately, it can get painful if left untreated.

Caused by fungi or bacteria, swimmer's ear is the inflammation of the external ear canal, as explained in Johns Hopkins Medicine. When water gets trapped in the ear canal, it can allow bacteria to flourish and lead to the swimmer's ear, as noted by the American Academy of Otolaryngology — Head and Neck Surgery (AAO-HNSF). As the name suggests, swimming can sometimes lead to this condition. But many other things can cause swimmer's ear, including cuts inside the skin of the ear, eczema, and even cleaning too far inside the ear canal, as further noted by the AAO-HNSF. You can get swimmer's ear without going anywhere near a pool or beach, which is quite a bummer.

The early symptoms of swimmer's ear can include mild discomfort, itchiness, and redness around the ear area, as noted by the Mayo Clinic. More severe cases can progress to hearing problems, a feeling of fullness inside the ear, and severe pain that can extend to the face and neck, as further explained by the Mayo Clinic. With this in mind, it's best to treat these infections ASAP. Here are some proven methods for taking care of swimmer's ear infections in the early stages.