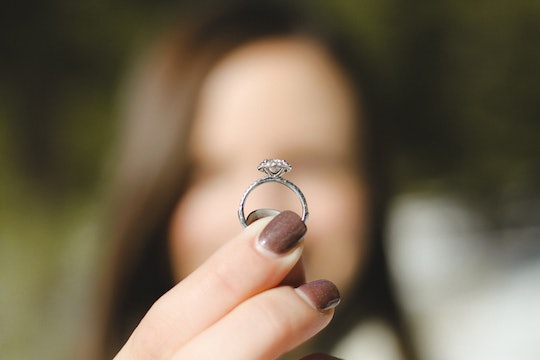 How To Turn Down A Proposal If You're Not Ready

One of the most beautiful things in the world is marriage. Not only is it a way for you to say, "Hey, I love you so much that I'm willing to spend the rest of my life with you," but it's also a reminder that your dreams of love really can come true. When I was younger, I never thought that there were people who didn't go through with marriage after the proposal. That was until I witnessed a proposal denial in college and everything changed. If I ever wanted to know how to turn down a proposal, that was the moment that I no longer had to wonder.

To be honest, seeing that happen was one of the saddest moments of my life — and it didn't even happen to me. Seeing it made me wonder if there really is a right way to turn down a proposal and not embarrass yourself or your partner.

The short and direct answer is no. There really isn't a way to ease the sting that a person feels when you deny their proposal — especially when you're aware that marriage is on their radar. However, there are definitely ways to turn down a proposal in the most polite way possible.

Though the way you deny depends on whether it's done in private or public, some of the most important things are to be aware of both your facial expressions and body language. According to Natural Hair Bride, private proposals allow you to be a little more straightforward and honest about your decision to turn down the proposal. Whether the reason is because you need to build more on your relationship or if you just aren't ready to take the plunge, you have the ability to be a little more honest about the how and why behind your decision to hold off on your "Yes."

On the other hand, if you are proposed to in an open setting, being openly honest with your partner while everyone is around may not be the way to go. The Huffington Post noted that while you shouldn't say yes just to avoid breaking your significant other's heart, you should be super sensitive to the fact that you will be doing so with your saying no. In my opinion, there's really no right way to say "no," especially when there are people around waiting to hear your response. But, you have to remember that you're the one that will be in the marriage — not all of the people waiting to hear your reply, so being as honest as you can is the best option.

So, whether you're the one being proposed to or the one considering doing the proposal, having the discussion of if marriage is on the radar sooner than later is super important. And, if you're not 100 percent sure if your significant other will accept your proposal, the best thing to do is to opt for a more private and personal proposal over a public spectacle and share the good news with friends afterwards.