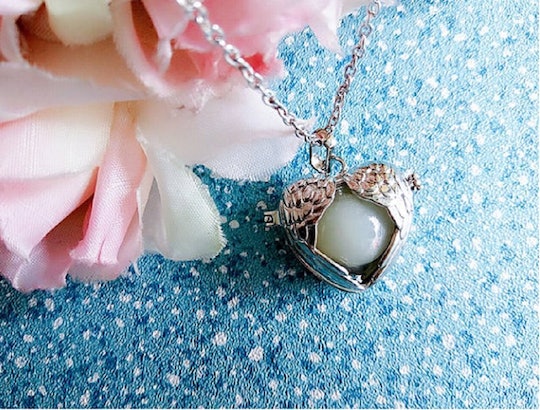 The Breast Milk Jewelry Trend Is Really Catching On

When you become a parent, you start doing things you might not have ever imagined doing, whether it's wiping someone else's tiny butt in public or surviving on two hours of sleep a night. But what about turning your breast milk into jewelry? If you're not a mom who loves breastfeeding, you probably haven't given it much thought, but more and more women are doing it.

Since there's a whole process of treating the milk, you're going to want to find a pro who knows what they're doing so that the milk doesn't go bad, as Circa noted. There are way more women out there professionally making breast milk jewelry who you can turn to.

For example, Heather Johnson, a mother of two, runs her business, Fruit Of My Womb, out of her home in Cullman, Alabama. She started by getting trained to do placenta encapsulation, but soon realized that preserving breast milk would be just as good a splurge for a new mom. Sure, there aren't any reported health benefits to wearing breast milk around your neck like there allegedly are with consuming your placenta, but it's definitely a special sort of keepsake for mothers to remember the first few months of motherhood.

Johnson told Circa that she keeps her process "top secret," but says that it does involve a process to ensure that the milk can last and not go bad. She makes rings, earrings, and necklaces from mothers' milk.

Johnson isn't the only one out there making breast milk jewelry. Other crafty and sentimental jewelry makers have also caught onto the trend. Although there are DIY kits on Amazon if you trust your inner mad scientist, it's probably best to go with someone who has perfected a way to keep the milk fresh. Many breast milk jewelers have their own method of preserving the milk, which can range from dehydrating it or mixing it with other materials so as to keep it from growing bacteria.

Sharoupim's method is simple, according to the New York Post. She has clients send in an ounce or two of packaged breast milk and then uses a "proprietary process" to turn the milk into a solid resin material for the beads. She's also a pharmacist, so she managed to figure out the chemistry behind it on her own.

"I worked for months to come up with a way to create jewelry that would last,” Sharoupim told the Post.

Both Johnson and Sharoupim only promote their small businesses on Facebook, but the breast milk jewelry trend has been growing over the past few years. Olga Grove, a mom of two from Pennsylvania, told ABC News back in 2013 that she had preserved her kids' breast milk in jewelry because, although breastfeeding was not always the easiest thing to do, she was getting nostalgic.

She told the outlet that she was initially a little weirded out about wearing breast milk, but then came around. "I don't have to tell anyone what it is, and if someone asks, I may tell them. But it just looks like a white bead," she told ABC News.

Not everyone is convinced that it's such a nice gift to give someone else. Brooke Becker, a breast milk jewelry maker who sells on Etsy under MilkMomBaby, told CBS News, "I think initially you tell some people about it and they say, 'Oh, that's gross.' Breast milk is pretty personal. Just sending that off to someone is a little bit of a leap for people."

Which is also exactly why some women seem to flock to sellers to get a keepsake of their own. It's like saving a lock of hair or your baby's first tooth, which is something that certain sentimental moms have been doing for ages. Why stop there? Although breastfeeding is different for every woman, you might miss it more than you think when it's over.