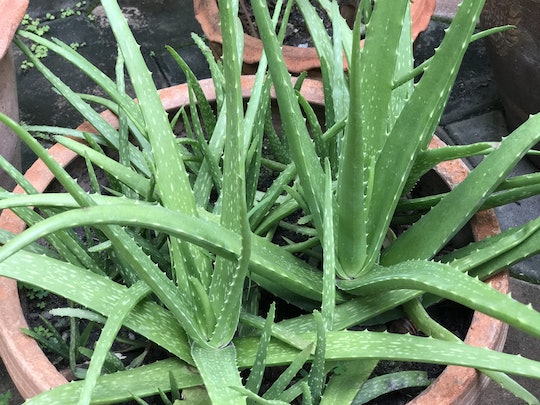 Even if you're super careful about sun protection, sunburns can still happen. And they hurt. If you're feeling the burn, then knowing how to use an aloe vera plant to treat a sunburn quickly and naturally is helpful. This unassuming plant can offer some serious relief.

If you have a plant handy, then simply split the aloe vera leaves and apply the gel to your burn, as explained by the University of Arkansas for Medical Sciences. The gel is the clear substance right inside the aloe plant that looks like jelly, and you can just use a spoon to scrape it out. For maximum cooling effect, place the plant in the refrigerator for a few minutes first. Applying that chilly aloe gel straight to your burn will feel like a miracle.

The aloe vera plant's ability to soothe a burn is backed by some studies as well. For instance, aloe vera was found to treat second-degree burns more effectively than silver sulfadiazine creams, according to a 2009 study in Surgery Today. Because it contains antioxidant, antibacterial, antifungal, and wound healing properties, aloe vera gel is under study for its medical use, as further noted in Surgery Today. In fact, aloe vera is recommended as a sunburn treatment by the American Academy of Dermatology itself. In other words, this succulent is legit.

For the most part, using a fresh aloe plant may be easier and more effective than some of the sunburn treatments available in stores. “After-sun formulas tend to have rich, thick consistencies containing oils, which create an emollient barrier on top of the skin trapping in the heat in the upper layer of the epidermis and exacerbating the inflammation and ‘burn’ feeling on your face,” said skincare expert Michaella Bolder in The Independent. In addition, added fragrances in some of these formulas can just irritate the skin even more.

Plus, buying products that appear to include aloe can be a gamble. Some skin gels claiming to contain aloe vera produced no actual evidence of the plant in lab tests, as a 2016 Bloomberg News investigation discovered. These products were all purchased from major retailers, too.

With this in mind, it's much easier to grow your own aloe at home. Aloe vera plants are widely available, inexpensive, and pretty low-maintenance. (I've kept one alive for several months now, and that's saying something.) It's a little bit of skincare you can grow on your windowsill for next to nothing.

That said, a fresh aloe vera plant is not a perfect cure-all treatment for every sunburn. If your sunburn is severe, blistering, or causing a skin infection, then it's time to seek medical attention at once, as noted by the Mayo Clinic. When it gets to that point, the sunburn is above the pay grade of an aloe plant. You need a doctor.

In addition, some poor souls may experience an allergic or irritation reaction to aloe vera, as a friend of mine found out the hard way. She rubbed some aloe vera gel on a mild sunburn, and her skin reacted so badly that she wound up in the hospital. She's OK now, but she has to avoid anything containing aloe. Although true allergic reactions to botanical skin care products are low, some people do experience irritation from them, as noted in Allergic Living. Of course, the worst time to realize you have an irritation reaction to aloe is when you're trying to treat a sunburn.

For the most part, though, aloe vera is a helpful plant to have on hand for treating mild sunburns. Granted, the best course of action is to avoid sunburns by using effective sunscreen and seeking shade, as noted in Romper. But if the worst does happen, at least the chill little aloe vera plant can help soothe a sunburn better than almost anything.

More Like This
Here’s Why Your Vagina Itches At Night, According To Experts
Why Does My Vagina Smell Sour? Vaginal Odors & What They Mean
When It’s Safe To Bring Your Newborn To A Restaurant, According To A Pediatrician
Can You Burp A Baby Too Hard? A Pediatrician Shares Tips For Gassy Tummies