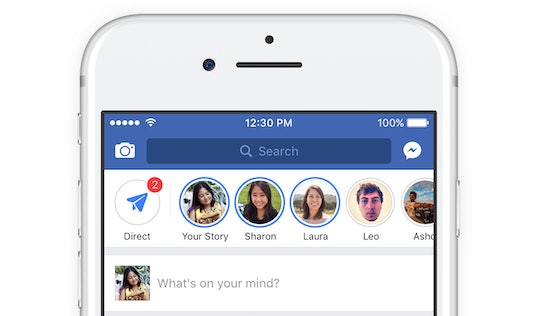 In case Snapchat stories and Instagram stories weren't enough for all the content you have, the blink-and-you'll-miss-them stories feature has now arrived on yet another popular social media platform. The latest app to take the plunge into bite-sized storytelling is Facebook. The concept is a familiar one if you're already using Snapchat or Instagram, but in case you need a refresher, here's how to use Facebook stories, the latest social media update.

The success of apps like Snapchat and Instagram have definitely turned the heat up for other social networks that want to stay ahead of the game. The appeal of temporary or "disappearing" content isn't just for users, either: brands have found innovative ways to use these features, too. Since Facebook is still the most popular social media platform, according to Pew, it's not surprising that it has decided to add a feature inspired by what's been successful for its competitors.

The update to the Facebook app was announced Tuesday morning and was slated to begin rolling out immediately. With it comes an in-app camera update, appearing in the top left corner of your newsfeed. This will take users to a navigation setup similar to Snapchat. The camera also, of course, has editing features so you can draw over what you capture, or add stickers and fun filters. Some of the effectives are "reactive" which means you can interact with objects moving around you. And, like Snapchat, these stories only last for 24 hours before disappearing.

Finding the update in your app is pretty easy: the stories circles will be at the top of your newsfeed, very similar to how it appears in Instagram. As you start watching stories from friends, the Facebook algorithm will determine the order that those story circles appear for you, based on whose stories you view most often.

You'll also be able to direct message people in your friend's list via stories, a feature that is, again, similar to options you have in Instagram and Snapchat. Whatever you send to a friend directly can be replayed, and they can reply to you, but once the conversation ends the video you sent will disappear. Also, your stories won't appear on your timeline or in the newsfeed unless you specifically post them, so your friends will have to use the Stories feature to see them.

In its press release, Facebook said that it has plans to take the new feature to the next level by letting users get creative:

Over the coming months, we plan to introduce new ways for the Facebook community to create their own frames and effects that can be used on any photo or video created with the new Facebook camera. Our goal is for the camera to be a home to hundreds of dynamic and fun effects that give you new ways to connect with friends, family, and your community.

The Facebook app is available on both iOS and Android devices. Usually, the app updates itself, but if you want to check to make sure you have the most recent update, you can check out Facebook's official mobile page.