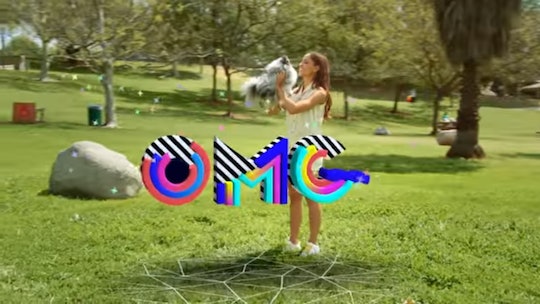 How To Use Snapchat's New 3D Filters

The virtual arms race between Snapchat and Facebook has intensified yet again, with Snapchat rolling out a new feature that will undoubtedly show up on Instagram in six months. If you don't want to wait, though, here's how to use Snapchat's new 3D filters, because they're actually really fun. First of all, some of them are filters, while others are stickers, and Snapchat refers to them collectively as "World Lenses." The end result has somewhat of a Pokémon Go feel about it, but without all that pesky walking.

To use the new lenses, switch to the the rear-facing camera, then tap any blank area on the screen before snapping or recording, just like you normally would when you use selfie filters. You can then swipe through the different options to add a single object, like a rainbow, a sleepy disco mushroom (seriously), or "STFU" made out of mylar balloons. You can also change the entire environment, surrounding yourself with stars, bubbles, hearts, balloons, and more. You can plant virtual flowers, fill the sky with rainbow-puking clouds, or bend and warp your surroundings like a cheap sit-com trying to convey what it feels like to be drunk. According to CNN, the lenses will be swapped in and out daily.

Coincidentally (or maybe not) World Lenses arrived on the same day that Facebook introduced Spaces, a virtual reality app that lets users "hang out with friends in a fun, interactive virtual environment," which solves the problem of VR being an inherently solitary experience. Users can create cartoon avatars based on their Facebook profile picture, then invite friends to join them as they explore 360-degree videos of different environments, draw in the air, and "relive personal memories" from their Timelines. Friends without VR capability can still join in on the fun through Messenger video calling. The app is currently available in beta for the Oculus Rift and Touch.

CNBC called World Lenses the "biggest step Snap has taken into augmented reality," and speculated that Snap could add the feature to their $130 photo snapping Spectacles to create a true AR experience, but that could be achieved more simply by creating an app that utilizes the passthrough camera on a Samsung Gear VR. That gets a little sticky, since the Gear VR is powered by Oculus, but Samsung is reportedly working on a new VR platform independent of Oculus, so we'll see what the future holds.