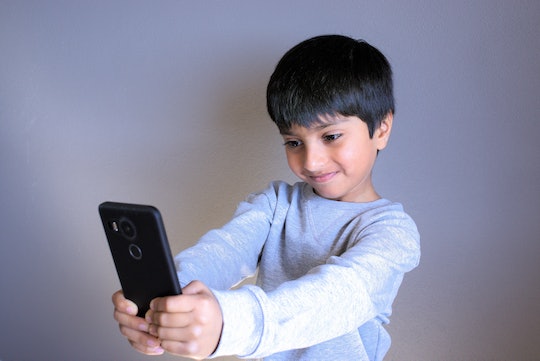 UPDATE: Following publication of this article, The Washington Post reported that the app behind the latest social media trend, FaceApp, has raised some privacy concerns some users may want to be aware of, specifically that using the app allows Wireless Lab in St. Petersburg, Russia access to your personal information and identity. According to the app's Terms and Conditions, users grant FaceApp access to "reproduce, modify, adapt, publish, translate, create derivative works from, distribute, publicly perform and display" your content, name, and other information provided to the app. You can read more about the privacy concerns here so you can make a fully informed decision about whether you want to use the app.

EARLIER: Some internet trends can be a little silly and even dangerous, but most of the time, they can be a lot of fun. And the newest trend is definitely just for laughs. You've probably noticed everyone from celebrities to friends using a special app to see how they look with a few more years of, well, wisdom, under their belts. And if you're wondering how to get in on the fun and how to use the aging filter to make your selfies look a a wee bit older, it's very simple to do.

It seems like everyone on Instagram has been posting photos of themselves with bushy eyebrows and deeply set wrinkles. No, there isn't some magic medical procedure that speeds up the aging process — they're using an app that applies a special filter to their face to make them look aged. And it's pretty funny to see how realistic it looks and how their futures might shape out one day.

But adults aren't the only ones who are getting in on the fun. Earlier this week, interior design super star Joanna Gaines decided to make her kids look old, too. Gaines took to her Instagram Story to share a photo of her 1-year-old son, Crew, with the aging filter applied to his face, according to People, and he looks so adorable and just so wise.

To make yourself look a bit older like Crew Gaines, you'll just have to follow a few steps.

To get started, head to the app store on your phone and search for "FaceApp". Once the app is downloaded, you might be asked to upgrade to a paid version, but that is optional. From there, you upload the photo of your choice to the app. Once in the photo editor, you should scroll through to the option that says "age." In the age section, there are three different options: two that will make you look younger and one called "old." Once you click on the old option, the app works its magic. Your selfie or photo of your kid will be transformed into a work of art.

It's important to note, however, that it might not work perfectly on every photo. Some photos will make the wrinkles look more pronounced, other photos might scare you a bit with how accurate it looks. But that's the fun of it — you can play with different photos to see how the results differ. Just look at how different Crew looks as an old man in this other photo Gaines shared to her Instagram Story.

This isn't the only feature that the app has; it also allows users to add bangs to their face, change their hair color, widen their smile, and see what they'll look like with a beard.

Joanna and Crew Gaines aren't the only celebrities to take part in this ongoing trend —Carrie Underwood, the Jonas brothers, and Drake have all jumped on the bandwagon, according to TODAY, and each photo gets better than the last one.