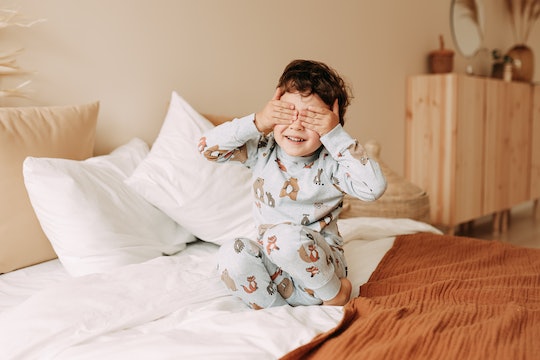 Next Time You Have To Wake A Sleeping Toddler, Try This Pediatrician's Trick

I know what you're thinking: "never ever wake a sleeping baby." In theory that makes sense, but in practice, not so much. In reality, parents go to work, kids go to daycare or maybe their grandparents', and you need to know how to wake a sleeping toddler so they're not miserable.

Whether you need to wake your toddler from a nap to head to a doctor's appointment, you need to get them to preschool, or their older sibling has swim lessons at a time when no one should be awake (Why do they do that?), figuring out how to get your tiny tot awake and alert is a trick. Pediatrician and sleep medicine specialist Dr. Daniel Erichsen reminds Romper, 'The thing with toddlers is that unlike adults and older children, trouble sleeping doesn’t come from stress but rather from poor timing. In other words, if you put a toddler to bed when they’re not sleepy, sleep is not gonna happen. If you try to wake them up when they are in deep sleep, they may get upset because now they want to sleep more."

And sometimes, they might take their sippy cup and chuck it across the room at breakfast because they need to let you know they're displeased. Why this was always my kid's go-to response, I'll never know, but I cleaned up a lot of milk. Unfortunately, there isn't some easy one-size-fits-all way to wake up a toddler. Erichsen notes, "There is no particular preferred way to wake a toddler up or a way to avoid them getting upset. However, there’s one trick that can help." And that trick is excitement. "Imagine a child who's always dragging, but Christmas Day they jump out of bed right away! This shows that when a child is excited about something, they wake up much easier and in a better mood," he says.

If you give your kids something to work forward to, they're going to get up. Maybe it's time on an iPad, maybe it's whipped cream on their waffles. If you wake them with the promise of a delight, they're more likely to get up without a problem. For my daughter, it was waking her up with Panic! At The Disco music and a pile of cut fruit. Once I learned that combination worked, I kept it up.

You can also try to wake them up with plenty of time to spare. I know it sounds good to wake them up 10 minutes before you need to leave so they get the maximum sleep, but if you're rushed, then so are they, and it can leave everyone super stressed out.

Erichsen does caution that "even if they wake up angry or upset, that doesn’t mean that they’re not gonna sleep well later on. So don’t let this discourage you." It's helpful if it can be at the same time, every day, but it's good to know that one tantrum does not a bad day make. Just move through it and move on, knowing they will probably chill out as the day goes on. And if they don't? There's always tomorrow.