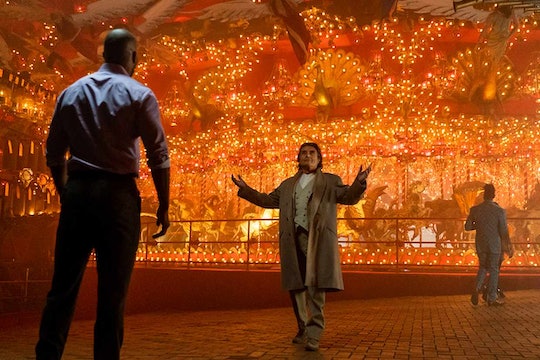 No Cable? No Worries — Here's How To Watch Season 2 Of 'American Gods'

The wait for Season 2 of American Gods is upon you. The series, based on the beloved fantasy novel by Neil Gaiman is about to return on Starz. Since its debut in 2017, American Gods has had its share of controversy. Between cast and showrunner changes and scripts re-written, fans are ready and waiting for the Season 2 premiere on Sun., March 10. If you're among those without traditional cable, you need to know how to watch American Gods Season 2 so you don't miss out on all the awesome. No worries — I've got you covered.

If you have a TV or computer, you can go straight to the Starz website and get a free trial to watch the American Gods Season 2 premiere. You can even download the app on your phone and watch the show from anywhere (just not while driving, thanks). After that free week, it'll cost you about $9 per month (which is $5 less than the cost of HBO, and HD Netflix, BTW). Gaiman himself even weighed in in an interview with Recode, proving that there are different ways to watch, including a free-ish option as I stated. "There are different ways to pay for it," he said. "Download the Starz app and watch it. There’s a Starz add-on to Amazon Prime to watch it. If you are incredibly cheap and grumpy, you could wait until week 8, ‘cause it’s gonna come out over 8 weeks, and then when you get to week 8 you could take a free Starz week. […] You could do that free week and watch it."

Other ways to watch American Gods include Amazon Prime Video for those outside of the US. You could do a Starz subscription on Amazon Prime, though it's still $9 per month after the free trial. Existing Prime members find it more convenient if already streaming anyway. Hulu also offers a free trial to watch both seasons of AG, for the same price. So really, it's all about which streaming service you prefer, if you're not relying on good old cable. If you need more help finding the most affordable and accessible way to watch, you can thank Gaiman for this nifty chart:

Season 1 ended a while ago which means you may want to use any of the free trials to catch up before starting Season 2. If you'll remember, Old Gods are being replaced by New Gods and there's a war brewing between them. The season premiere begins about 30 minutes after what took place in the Season 1 finale. Old Gods were relocated to Wisconsin and New Gods went on the hunt for Media. Bilquis is said to have a bigger role this season, while Tech Boy is looking to give hope to all the lost souls.

With Season 2 of American Gods ready to go, don't let the lack of Starz in your home derail you. There are options out there to keep you from missing out. So go forth and find your free trial, your streaming service, your cable add-on — your whatever — and start watching American Gods ASAP.