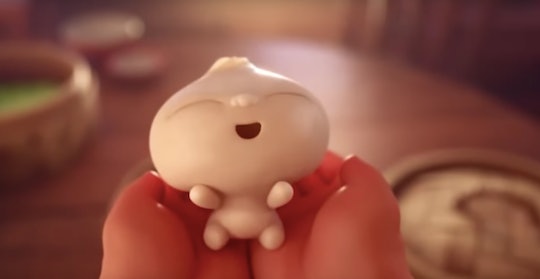 How To Watch 'Bao,' The Pixar Short That Will Make You Weep Over A Dumpling

Pixar’s The Incredibles 2 is cleaning up at the box office this summer. After just its first week in theaters, Rotten Tomatoes has it listed as the number one film. But not everyone can get to the theater to see the movie and when its a Pixar release, that means also missing the adorable short film that airs just before it. And with The Incredibles 2, you may have heard something about a little dumpling that's making people very emotional. So if you can't get to theater, or you want to weep over an adorable dumpling again, you may be trying to figure out how you can watch Bao, the Pixar short film at home.

UPDATE: On Nov. 23, just after Thanksgiving, Pixar posted the nearly eight-minute long short film on Twitter for its followers to enjoy. "Heartwarming moments are meant to be shared. Bring home behind-the-scenes, exclusive footage from Bao and 10 other critically-acclaimed shorts when you get the Pixar Short Films Collection: Volume 3 on Digital, @Movies_Anywhere, and Blu-ray today," Pixar wrote in a tweet. You can purchase the collection here.

And here's where you can watch the adorable Pixar short, Bao.

EARLIER: The unfortunate news is that Pixar doesn’t seem to officially release its short films on any of the internet’s most popular video streaming sites, like YouTube, Netflix, or Hulu. That being said, other people do find ways to post them on sites like YouTube and DailyMotion, so within a few weeks of release they can generally be found using just a Google search (here's an example with the 2016 Pixar short film Piper). Of course, since they're not officially released by Pixar, it's always a good idea to be wary of quality or content though, so maybe give it a pre-screening before letting any little eyes watch it.

You should also be able to purchase Bao — which runs about eight minutes — in about six months on Google Play, Amazon Video, and iTunes (again, these links use Piper for an example since Bao is still in theaters. Just enter Bao as your search instead). My comparison look at theater premiere vs. online availability dates looks like Pixar is fairly good about getting content to on-demand right around the six-month mark.

Of course, if you'd like a little more bang for your buck you might want to purchase Pixar's next short film collection. There have already been two volumes, and with the last one released in 2012 they're due for another one soon. These collections are also available through many on-demand services.

Bao goes a tiny bit darker than some of Pixar’s shorts, but it's nothing that will traumatize you or a child. The story is about a Chinese woman, mourning her empty nest, who discovers a little dumpling has come to life, according to Quartzy. It gives her something to care for but, like all young things, it eventually grows into a teen with an attitude. Pixar’s website says the short “explores the ups and downs of the parent-child relationship through the colorful, rich, and tasty lens of the Chinese immigrant community in Canada.” And that last part is based off the experience of the director, Domee Shi, the first female director of a Pixar short, according to Thrillist, who explained that the idea for the story came from her own mother.

Given prior short films, Shi certainly has a lot to live up to among the legacy of Pixar directors, but Bao is already doing just that. The company has had 14 short films nominated for Oscars, and four wins. The most recent was this six-minute creation Piper, which won for Best Short Film (Animated) in 2017. It’s so adorable, I beg you to click play:

See, wasn’t that worth it?

And when you watch the adorable dumpling in Bao, you're bound to feel an urge to weep and then say, “Oh I could just eat you right up!” And there's actually a name for that feeling, like you might say to a baby when you see their adorably chubby checks and itty bitty toes. Yale researchers call it “cute aggression”, according to Quartzy; they liken it to the way some animals bite and nip even when they seem happy, and think it may be a way of moderating intense feelings.

If Pixar gets any cuter with these short offerings, it'll have to be careful they don’t create entire theaters full of watchers suffering cute aggression. Then again, there’s always popcorn, so keep it up Pixar!