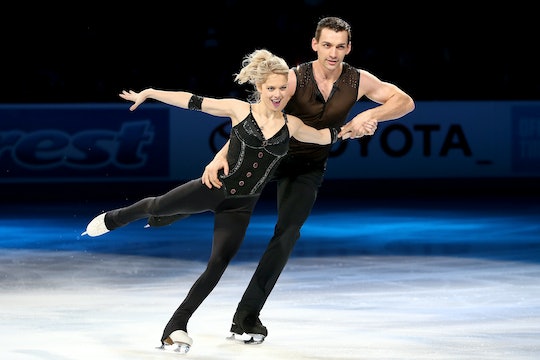 One of the best parts about the Winter Olympics is the figure skating, especially when it comes to watching the couples perform. The moves and stunts are always incredible and the Olympics are, of course, the best of the best. So you'll probably want to know how to watch couple's figure skating during the 2018 Winter Olympics, so you miss one single spectacular stunt.

But since that's a lot to take in, here's a layout of the schedule (centered around the Pairs' programs and Team Events) to help make it easier to follow. And remember, all of the times provided are in Eastern Standard Time:

You'll also be able to catch clips from the competition on NBC Highlights as well as on NBCOlympics.com and the NBC Sports app.

Unfortunately for the U.S., couple's figure skating isn't our strongest competition. This year the U.S. is only sending one pair to the Winter Olympics, the smallest pairs contingent to be sent to the Olympics since 1924. However, when it comes to the cost of sending duos to the Olympics it makes sense that the U.S. is only sending one this year, since the U.S. pairs teams haven't medaled since 1988. The couple being sent this year is husband and wife team Alexa Sciemca Knierim and Chris Knierim.

It was a big feat for the Knierims to come back and qualify as the sole U.S. pair figure skating team. In 2016, Alexa's weight dropped below 90 pounds due to a life-threatening illness. She had to undergo three abdominal surgeries between April and October and she told NBC that it took her more than four months to get back on the ice after her last surgery. However, Alexa has now fully recovered and she and her husband were able to fight their way back to the top and qualify for the Olympics this year.

This is the Knierims first Olympics run, however the pair have been successful on the ice since they first began skating together back in 2012. They are two-time U.S. National champions (securing their second win this past January) and they've earned a bronze medal at the 2014 Four Continents and won silver at the 2016 Four Continents.

Obviously the Knierim's are skilled on the ice, but do what they have what it takes to finally get the U.S. another Olympic medal for pairs figure skating? It's hard to say. The competition is definitely tough with Canada currently being the projected winner in almost every category of figure skating this year. That being said, anything could happen at the Olympics, so fans will just have to watch and see how this all plays out. Of course, I'm rooting for Team USA.