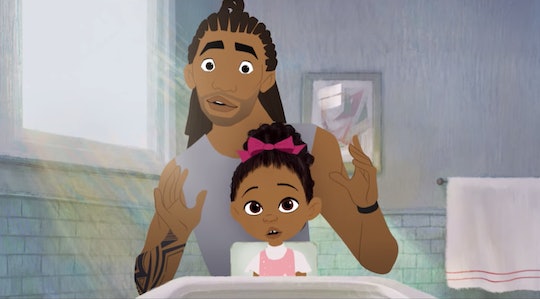 How To Watch 'Hair Love,' The Oscar-Winning Short About A Black Dad & His Daughter

On Sunday, former NFL player Matthew Cherry won Best Animated Short Film at the 2020 Academy Awards. Viewers at home unfamiliar with the touching, 6-minute creation are able to watch Hair Love, the Oscar-winning short about a black dad and his daughter, on YouTube. And there's no fee to rent or stream. You can find the full short below. (Just be sure to watch until the very end. Trust me.)

Cherry — who wrote, directed, and produced the short — accepted the Oscar with his co-producer Karen Rupert Toliver by his side. “We have a firm belief that representation matters deeply," said Rupert Toliver. During his portion of the joint acceptance speech, Cherry dedicated his Oscar to the late Kobe Bryant. (Bryant and Glen Keane won for Best Animated Short Film in 2018 for Dear Basketball.) "May all our second acts be as great as his," he said.

Additionally, the filmmaker dedicated the award to his special guest, DeAndre Arnold — a Texas high-schooler suspended for wearing dreadlocks against his school's policy — who was in attendance. "I want to say Hair Love was done because we wanted to see more representation in animation" Cherry said. "We wanted to normalize black hair."

Take a look at Cherry and Supert Toliver's emotional acceptance speech for yourself.

Originally, Hair Love debuted in August ahead of The Angry Birds Movie 2. Now we're into 2020, it's about time to give the film a rewatch:

That ending, though! It gets me every time.