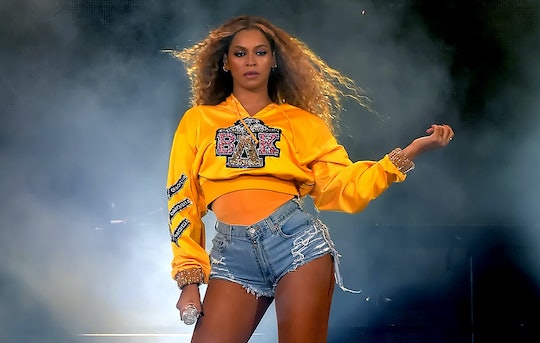 Here's Where To Stream 'Homecoming: A Film By Beyonce'

After releasing her prolific visual album Lemonade on HBO, Beyoncé is switching platforms for her next film project. Members of the Beyhive wondering how to watch Homecoming: A Film By Beyoncé are going to want to make sure they have a Netflix password handy — the documentary streams exclusively there. Homecoming offers a behind-the-scenes look at her historic 2018 Coachella performance, a love letter to HBCUs and the black college experience. It marked the first time a black woman has ever headlined Coachella, and the set even had a built-in comeback story: Beyoncé was initially slated to play the festival in 2017, but had to cancel after announcing she was pregnant with twins.

Aside from being the first black woman to headline, Beyoncé was only the third woman to headline Coachella solo, period. The honor had previously gone to Lady Gaga, who replaced Beyoncé as headliner in 2017, and Bjork in 2002 and 2007. In addition to performing her set for the crowd, which included Rihanna, a YouTube live-stream — widely praised for its sophisticated editing — and playback made the show accessible to fans everywhere. But now, the Beyhive is getting a behind the scenes look into the making of what became known as Beychella.

The Netflix synopsis teases, "This intimate, in-depth look at Beyoncé's celebrated 2018 Coachella performance reveals the emotional road from creative concept to cultural movement," and the trailer features a voiceover by the late Maya Angelou. Two HBCUs, Howard and Texas Southern, announced that they would be hosting advanced screenings of the doc. Beyoncé's Coachella performance famously featured a massive marching band comprised of students from the eight HBCUs, plus a step team performance, and majorette dancers. Following the music festival, Beyoncé announced an expansion to her HBCU scholarship fund, the BeyGOOD Initiative's Homecoming Scholars Award, according to Rolling Stone.

Needless to say, the historic performance was epically well-received, both critically and by audiences. It stood in sharp contrast to her 2015 Black Panthers-themed Super Bowl show, which, though beloved by fans, was considered too radical by many prominent white critics. (In fact, her Super Bowl performance became a lightning rod for raising awareness about newsroom diversity and who's takes on black culture should be centered, which may have played a role in her Coachella performance being better received by a more diverse group of critics in 2018.)

I told Beyonce that i was afraid that the predominately white audience at Coachella would be confused by all of the black culture and Black college culture because it was something that they might not get. Her brave response to me made me feel a-bit selfish and ashamed. She said i have worked very hard to get to the point where i have a true voice and At this point in my life and my career i have a responsibility to do whats best for the world and not what is most popular.

But it's clear that the needle has moved significantly since her more difficult 2015 performance, and audiences are thirsty for more. Homecoming: A Film By Beyoncé is currently streaming on Netflix.