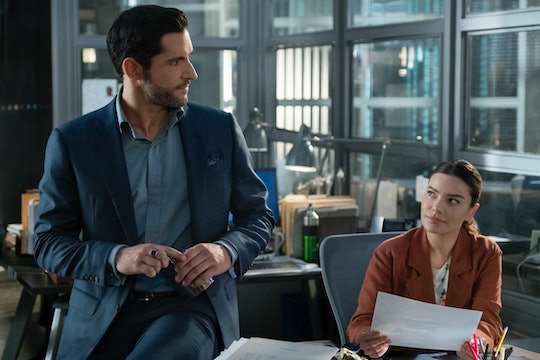 Thank Heavens, The Devil Is Back On Season 4 Of 'Lucifer'

After months of tweeting to the TV gods, fans were able to save the Devil, and now he’s back, badder than ever. Lucifer was cancelled by Fox last year, but when fans reigned hell on social media, it was picked up for a fourth season by a major streamer. Now, if you’re ready to dive back into the action with the Devil and the Detective, you’ll want to know how to watch Lucifer Season 4.

Lucifer fans should tune into Netflix to catch the new season, which premieres on Wednesday, May 8. And if you’re new to the show, or just want to rewatch for a refresher, you can find the first three seasons on the streamer as well. However, unlike its previous 26-episode season, Season 4 of Lucifer is dropping with only 10 episodes. I know. It sucks. You truly desire a much longer season, but according to Lucifer Morningstar himself, with its revamped layout, this already terrific show is getting even better.

In an interview with TV Line, lead actor Tom Ellis talked about the new season and how its reduced size helps add depth and dimension to the story. “Honestly, I believe that this format is much better for the show,” he explained. “When you’re doing 22 episodes, it’s difficult to keep your story taut for dramatic tension. You have to find ways to fill [time], basically. But this format means our story is distilled down in a way that every episode is much richer. It feels denser, and what’s at stake in every episode is much higher.”

Along with being able to control the pace of the show, making the jump from network TV to a streaming platform also allowed showrunners to push boundaries they couldn’t before. When talking to The Wrap, Ellis revealed that fans may see a little more language and nudity in Season 4, but he also promised that the show will maintain the tone fans loved so much.

“Well, we had to be a bit careful, ’cause even though we’ve got new boundaries that we can work in, we didn’t want to change the show so much,” he told the outlet. “Because I think one of the reasons the show really worked and had such a broad appeal to people was that it didn’t get vulgar, it didn’t push it too far in certain departments. That being said, we do sort of push it a little bit more than we were allowed to on Fox. For example, you may see a bit more flesh this year, certainly Lucifer’s, than you have in previous seasons. You may hear the odd word that you wouldn’t have heard before.”

After a hard fought campaign last year, no matter how short or how different, I’m sure fans are just excited to see their favorite fallen angel and his crime-fighting squad back in action. Hopefully, with Dear Old Dad’s blessing, Netflix renews Lucifer for future seasons without a fight.

All four seasons of Lucifer are currently streaming on Netflix.