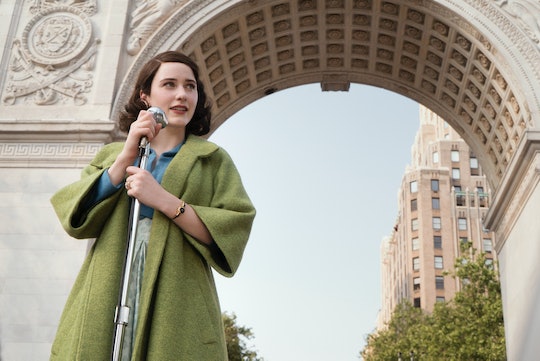 After sweeping every comedy category at last year's Emmys, The Marvelous Mrs. Maisel is back for a ten-episode Season 2 — two more episodes than the first season! The series has also already been greenlit for Season 3 after an unprecedented two-season pickup by Amazon. But fans who want to get into the show may be wondering how to watch Marvelous Mrs. Maisel Season 2. Like the first season, the show is returning to its home on Amazon Prime.

If you already have a Prime membership to ensure free two-day shipping on your Amazon orders, then you're good to go! The subscription gives you access to all Amazon Prime original series. If you're not signed up for Amazon Prime, then you can get a free 30-day trial, after which, a membership costs $12.99 if you choose to pay monthly, or $119 if you pay for a full year up front.

"She's got a new level of confidence, about stand-up specifically, heading into Season 2," Brosnahan told E! about her character. "She's felling [sic] good, she's on a roll, I think she feels like she's arrived at her voice and she's excited to grow it from there."

Brosnahan also teased that characters from Midge's three worlds — wife, mother, and daughter — begin to collide this season with hilarious results. Going into Season 2, Midge is still technically separated from her husband Joel, but they did enjoy a hook-up in the Season 1 finale. Could that be a sign of reconciliation or was it just a lonely, familiar fling?

Then, there's Midge's stand-up career, which really takes off after she got herself temporarily blacklisted last season. Season 2 finds Midge and her manager Susie going on tour together in the Catskills to play the Borscht Belt, a strip of summer resorts popularly frequented by Jewish families from the 1920s through the 1970s. And although no news about it has broken since Sherman-Palladino first mentioned it in an interview with The Hollywood Reporter last January, Gilmore Girls alum Lauren Graham reportedly had some very specific ideas for how she could be worked into Mrs. Maisel Season 2. You can find out whether she got her cameo when The Marvelous Mrs. Maisel drops on Dec. 5.

More Like This
School Is Back In Session! 'Abbott Elementary' Was Officially Renewed For Season 2
'Workin’ Moms' Season 7 Is Reportedly In The Works! Here’s Everything We Know
The Best Movies Airing On Freeform’s 31 Nights Of Halloween In 2022
'The Proud Family: Louder & Prouder' Is Returning For Season 2 On Disney+