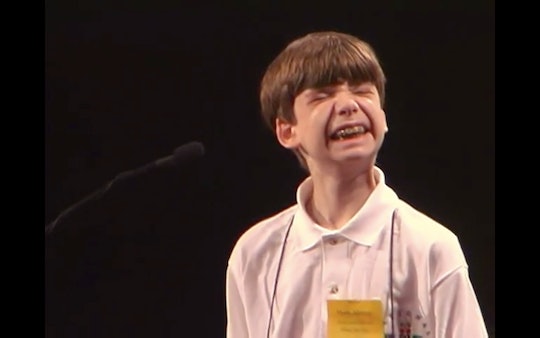 How To Watch 'Spellbound', Because The Scripps National Spelling Bee Is Coming Up

This week, 285 young spellers will compete in the Scripps National Spelling Bee, a nation-wide competition that pits students against one another to determine the year's best young spelling whiz. It's a competition made famous by the 2002 documentary Spellbound, which followed the stories of eight regional champs in the 1999 Scripps Spelling Bee. It's that time of year again, with Scripps' finals falling on Thursday, so you might be wondering how to watch Spellbound in preparation.

This might be your 14th annual viewing of Spellbound and the Scripps Spelling Bee that inspired it, but in case it's not, here's what you need to know: there are eight students, in the eighth grade or younger, competing for the finals, and eight different, diverse families cheering them on (or, you know, pressuring them). If you've ever been drawn in by the weird world of pageants, you might enjoy this admittedly somewhat odd-sounding documentary. It's been called "unique, fascinating" and "captivating," and — no big deal — was nominated for an Oscar. If that doesn't draw you in, watch it for the facial expressions of one young competitor from New Jersey as he tries to spell out "banns."

Without further ado, here's a few places where you can find the 14-year-old documentary for a fascinating glimpse inside the lives of young, national spelling bee competitors.

If you switch iTunes Stores over to the Australian version, you can rent or buy Spellbound. Rent it for $2.99, or buy it to re-watch every May for $9.99.

If you're jonesing for a physical copy of the Spellbound DVD to play at home, it'll cost you a pretty penny on Amazon. Amazon Prime doesn't stream Spellbound, but you can purchase the DVD for around $40. Apparently, Amazon's sellers think this classic is that good. Who knows? You might agree. (But I suggest taking that gamble with a $3 rental.)

Unfortunately, that's the extent of companies streaming Spellbound. Despite its great reviews (it scored a 98 percent on Rotten Tomatoes, so you know it has to be good), the number of places to access it remain fairly low. The movie is over a decade old, though, so I suppose it's excusable.

If you don't manage to watch Spellbound before the Scripps National Spelling Bee, please feel free to watch the competition and make up backstories for the competitors. Who knows? The documentary's already been done, but you could be on your way to the next best fictional movie out there.