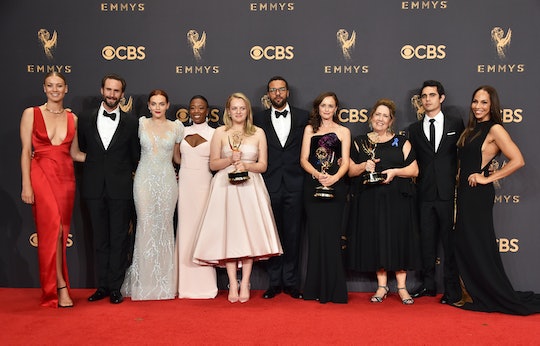 The time for Emmy nominations is almost here and you'll definitely want to tune in for this. There's been a lot of great TV in the past year from The Handmaid's Tale to Game of Thrones to so much more. Thus, the nominations will surely be stacked. So here's how to watch the 2018 Emmy nominations so you can find out who's been nominated live.

Thankfully, the Television Academy has made it pretty easy to watch the nominations. You can see the announcements streaming on Emmys.com, the official website, on the Emmys' Facebook, or on their YouTube page. The announcement will begin on Wednesday, July 12 at 8:30 a.m. PT/11:30 a.m. ET. If you're on Facebook, you can even set a reminder for when it will start so you're guaranteed not to miss it.

This year Emmy nominee Samira Wiley and The Blacklist star Ryan Eggold will reveal the nominations. While both stars are great, I don't think either will compare to three-time Emmy nominee Anthony Anderson doing the nominations with Gilmore Girls star Lauren Graham last year. In case you missed it, Anderson screamed when he heard his own nomination, unable to contain his excitement. He felt the same when his Black-ish co-star Tracee Ellis Ross was nominated as well.

This year the nominations should be interesting. Last year, Game of Thrones, the regular top contender in the drama categories, was ineligible for the Emmys because the seventh season came out too late. However, they're back for this year's Emmys, which means they'll most likely be going up against The Handmaid's Tale, which won Outstanding Drama Series at the 2017 Emmys, in a number of categories.

The Crown is also expected to get some nominations this year, and fans are hopeful Claire Foy will get the Emmy win this year, since after the second season she will no longer be playing Queen Elizabeth on the hit series. Additionally, Westworld is expected to get some nominations, and if that does happen it will be the first time HBO's biggest series will be going head to head at the Emmys.

On the comedy side, Atlanta is slated to get a number of nominations again this year for its second season. Fans and critics are also hoping HBO's Insecure will finally get nominated this year, especially because Veep can't be nominated this year since it's ineligible, leaving open a space that's been pretty much guaranteed to the show since it first aired. This also leaves the door open for someone else to win Outstanding Actress in a Comedy Series this year. Julia Louis-Dreyfus won the award for six consecutive years for her role as Selina Meyer on Veep.

Newcomer series Barry is also expected to score some nominations in the comedy categories. The show stars Saturday Night Live alum Bill Hader as Barry Berkman, a hitman who moves to Los Angeles and gets involved in the city's theatre scene. Additionally, Netflix's hit show GLOW is also a hopeful contender for some Emmy noms this year, including Alison Brie's first Emmy nomination.

So, there is plenty to look forward to at this year's Emmys nominations so you'll definitely want to tune in for this. You won't want to miss it!