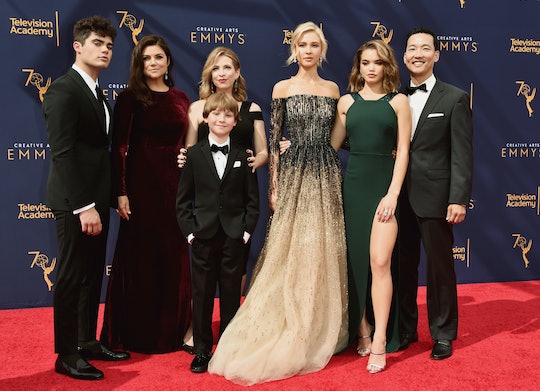 How To Watch The 2018 Emmys, Because This Year's Show Is Slated To Be Epic

It's that time again: Labor Day has passed, the weather is cooling down, and it's almost time to tune into the next season of this year's award shows. If you're a serious TV stan, you know what that means. Here's how to watch the 2018 Emmys, because this year's show is slated to be one of the best in recent history.

InStyle reported that the 70th annual Emmy Awards will be held on Monday, September 17, 2018 at the Microsoft Theater in downtown Los Angeles. However, you can tune into the show on NBC, as it will be airing at 8:00 p.m. ET and 5:00 p.m. PT simultaneously. And as for one of the most important details of the night, People reported that Saturday Night Live's Michael Che and Colin Jost will be hosting the show.

"NBC is thrilled to be the home of this year's Emmy Awards and with Colin and Michael in the driver's seat as hosts, along with surprise appearances by other cast members of Saturday Night Live, I think we are in for one of the funniest awards shows in a long time," Deadline reported NBC's Entertainment Chairman Robert Greenblatt said in a statement. "We're proud to be the first duo hosting the Emmys since Jenna Elfman and David Hyde Pierce and somehow that's a real fact," Jost and Che added.

Though there are many nominations to go over (and this is not even including the daytime Creative Arts awards) Vanity Fair reported the full list of noms, including some of your new faves like The Handmaid's Tale and Stranger Things as well as bona fide stars like Allison Janney and Lily Tomlin.

However, if you do not have cable, a TV, or other access to watch the show live on NBC, there are other options. Deadline reported that, beginning at 8:00 p.m./5:00 p.m. (PT) Mario Lopez and Sheryl Underwood will be streaming the red carpet on various social media sites such as YouTube, Instagram, Facebook, Twitter and Periscope. Then, the award show itself is available to stream if you visit the official Emmy Awards website.

More Like This
Here’s Everything You Need To Know To Watch The 2023 Puppy Bowl
'1923' Will Deliver More Dutton Family Drama In Season 2 Of The 'Yellowstone' Prequel
Marcel The Shell Is Heading To The Oscars!
Pixar’s 'Turning Red' Is Nominated For An Oscar — Here’s How To Watch It Right Now
What Parents Are Talking About — Delivered Straight To Your Inbox