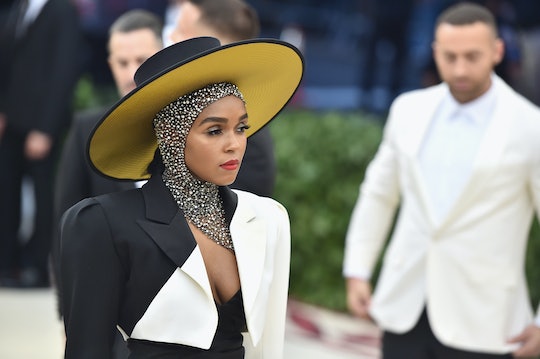 This Year's Met Gala Embraces The Extremes Of Camp

Every May, the Costume Institute at the Metropolitan Museum of Art In New York hosts the Met Gala. The big draw of the event (for us outsiders at home in sweats) is watching celebs roll up to the red carpet in outlandish themed outfits. This year the theme is "Camp: Notes On Fashion," which should provide some fun, over the top looks. But you'll need to know how to watch the 2019 Met Gala Red Carpet to see how each celebrity interpreted the brief.

Vogue has you covered when it comes to keeping up with the Met Gala. The event starts at 5:30 p.m. ET and they'll be liveblogging the event so readers don't mis a minute. But they'll also be streaming live on Instagram and Snapchat, where fans will be able to see interviews with famous fashionistas, as well as every new arrival. The Vogue Twitter account will offer updates too, so no matter what social media platform you frequent, you'll be able to follow every second of the gala.

But those aren't your only options. E! will also be covering the event with a Live From the Red Carpet: The 2019 Met Gala special. It begins at 5 p.m. ET and, according to Harper's Bazaar, will run for four straight hours. That's a lot of fashion.

The E! News special will be hosted by Giuliana Rancic and Brad Goreski, with correspondent Zanna Roberts Rassi and Project Runway judge Elaine Welteroth stepping in, too. If you'd rather check in via social media instead of staying glued to the TV for hours, then you can rely on E! News to provide you with all the Met Gala content you need on Twitter, Facebook, eonline.com, and the E! News app. But if you'd like to see the special and don't have cable, then you can try streaming on Hulu Live TV instead. Though everything kicks off early in the evening, the New York Post advises readers that celeb arrivals are usually closer to 7 p.m. ET. No early bird specials for these style icons.

In general, social media might be the best place to watch the night unfold. Celebrities usually post their looks on Instagram, and those pictures will be quickly picked up by fans and fashion blogs. And since this isn't an award show, you're not really missing anything by catching up the day after. Tomorrow morning, social media is sure to be awash with photographic evidence of the wild fashion on display. I promise you that whatever Rihanna wears, you will see a picture of it somewhere. This event draws so much attention that it would probably be harder to go out of your way to miss it.

The 2019 Met Gala will be hosted by Lady Gaga, Serena Williams, and Harry Styles, according to Marie Claire. Gaga is certainly an expert on camp, which Vogue editor-in-chief Anna Wintour helpfully described during an interview with CNN. She summed up camp as "the opposite of nature," with an emphasis on the artificial or fake, but usually with a hint of irony and humor. This year's gala may be one of the strangest (and most fun!) so it's a good thing that now you know exactly how to watch.