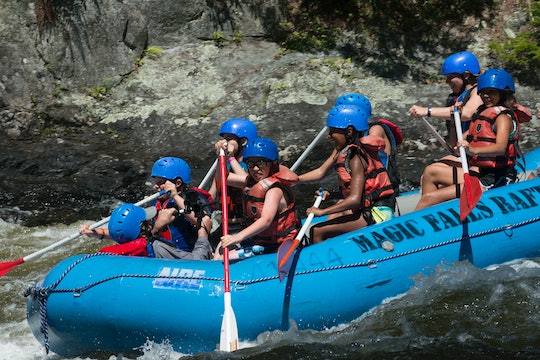 Your Kids Are Going To Love The 'Bug Juice' Reboot

Once upon a time, back in the late '90s, there was a Disney Channel show called Bug Juice, in which kids explored nature, grew their friendships, and just had a lot of fun. If, in the years since the show was canceled, you've wanted to revisit that iconic summer camp, then you're in luck. The series is getting an all new, revamped second go, so if you are hoping to relive your childhood Camp Waziyatah excitement, you should know how to watch the Bug Juice reboot.

The new series is officially titled Bug Juice: My Adventures at Camp, and it’s all set to premiere on the Disney Channel on Monday, July 16 at 7:30 p.m. ET. The show will air its entire 16-episode season throughout the summer, with new episodes airing from Monday through Thursdays each week. But if you aren’t home or are unavailable in the evenings, don’t fret, because you can also stream episodes through the DisneyNOW mobile app and through Disney VOD (Video On Demand).

The reboot is coming full circle, as it heads back to the original summer camp where Bug Juice was first filmed in 1998. A Disney Channel press release revealed that Bug Juice: My Adventures at Camp will revisit Maine’s 130-acre summer camp Camp Waziyatah, and follow a new, younger cast of kids as they spend their summer adventuring through activities like white water rafting, archery, horseback riding, water skiing, and musical theater. While the camp activities are still mostly the same as they were 20 years ago, they now have an exciting new feature called the “Blob” which is a giant “inflatable blob that propels campers into the lake.”

It’s a reality style series, but geared towards children. In a press release, Disney described the show as a an unscripted series that shows the wide variety of experiences the campers face from fun activities to challenges including "trying to fit in, being homesick, swimming tests and the ups and downs of friendship.” Through all the challenges, you’ll get to see ”the resilience of the kids, the many ways they support each other and how they each come into their own through a summer of fun.“

If you were a fan of the show like I was back in the day, you might be worried about the tone and style of the reboot, and whether it will stay true to the original. Luckily, Evolution Media, the same production company that created the first version, is bringing Bug Juice back. So chances are you can count on seeing everything that you loved about the original. However, according to a report by Entertainment Weekly, the new series will have a few modern additions, including “boomerang” shots, on-screen memes, and fun animated on-screen emoticons. Plus the cast of kids is younger this time, aged 10 through twelve, and they’ll even be carrying and using their cell phones the whole time.

So, if you’re ready to head back to your childhood summer camp memories and bring back some Bug Juice nostalgia, make sure to catch the Bug Juice: My Adventures at Camp premiere on July 16.