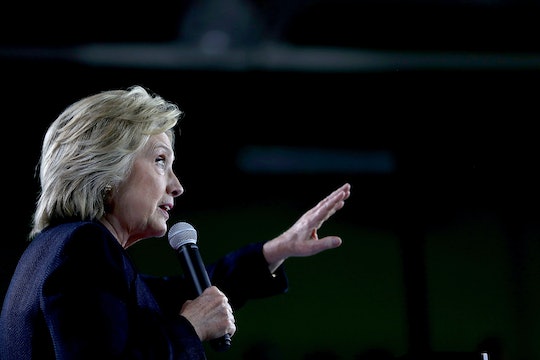 The one good thing about the 2016 presidential election cycle is that it's almost over and in just two months, Americans will know who the next big boss is going to be. It also means that we're getting into the heated debate season, but before the two candidates really face off, there's a bit of a pre-game on Wednesday night. And you need to know how to watch the Commander-in-Chief Forum so you can start placing bets on how the actual debates are going to go.

The event is hosted by NBC News and Iraq and Afghanistan Veterans of America and it's the first one they've ever done. It will be like the town halls that some of the cable networks ran during the primary season and each candidate will sit down with NBC’s Matt Lauer at the Intrepid Sea, Air & Space Museum in New York City and answer questions separately.

NBC will simulcast the event live on MSNBC and on NBC proper at 8 p.m. ET in most markets, but if you live in Mountain or Pacific time zones, the live broadcast times vary by market, so you have to check your local listings. At 8 p.m. in both Mountain and Pacific time zones, NBC will re-air the forum. It can also be streamed live at NBCNews.com.Forum. So no one has to miss a thing.

It's probably going to be interesting especially since the questions, given its hosts and location, are going to focus on foreign policy, national security, but mainly about veteran's affairs. It's a good time, just before the first official debate on Sept. 26, to get the candidates on record about their views on these things. That way moderators can call them out afterwards. It's like a dress rehearsal for the debates, even though the issues are real and prescient and very important.

On Wednesday afternoon, Republican nominee Donald Trump gave a speech on his "secret" plan to fight ISIS and how he wants to invest more in the military, he didn't mention vets much, but he'll probably get his chance on Wednesday. Trump's plan is that he wants to have the "generals" create a plan within 30 days after he would presumably take over the Oval Office.

During his campaign, Trump allegedly donated money to veteran causes, but there have been some discrepancies about what he's reportedly given and what's in the actual records. Nonetheless, he continues to lead in the polls among military families and vets, so something about what he's saying must be clicking with them.

No doubt, Democratic nominee Clinton will talk about her experience as Secretary of State and her plan to overhaul the entire VA system. The Commander-in-Chief Forum is bound to be interesting for anyone curious to hear the candidates speak on-record, this close to the election, about their plans for the American military, whether it's taking care of them at home or overseas. Each candidate should expect anyone dedicated to the military and veterans' issues to be listening very, very carefully.

The first debate is in a few weeks, but Wednesday's forum is going to be a good teaser for what's to come.