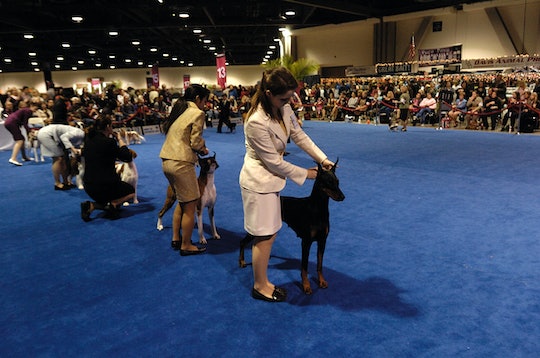 There's nothing better than relaxing in front of the TV on New Year's Day after ringing in the new year the night before. While there will be many TV programs to choose from on Jan. 1, dog-loving folks will definitely want to know how to watch the dog show on New Year's Day and witness thousands of impeccably groomed dogs perform in the American Kennel Club's competition for the top prize.

To watch, you'll need to check your local listings to find out what channel Animal Planet is on. Or, viewers can also stream the dog show from their computers on AKC's website when it airs. All you need is a cable subscription log in and you'll be good to go.

It seems like this dog show is going to be action-packed. Animal Planet's broadcast will take viewers behind the scenes to look at different dog action sports taking place and of course, show who will take the top prize title of Best in Show and more than $150,000 in prize money. Since there were 5,724 dogs from 50 states (in addition to Washington, D.C. and Puerto Rico), who entered the show, it's safe to say that the competition is incredibly fierce.

But if your New Year's Day is filled with fun activities outside of the home, and you happen to miss the broadcast, don't worry. The 2019 AKC National Championship Dog Show will be available to stream on AKC.tv after the fact as well so anyone can watch it as many times as they please. Or, if you prefer to be spoiled, you can find out which breeds took the top spot in their respective groups, since the show was held (and pre-filmed) in early December. But you won't find what dog took the prize for Best In Show, those results are being saved for the broadcast on New Year's Day.

Although seeing 5,724 dogs in person would be the best way to ring in the new year, watching the 2019 AKC National Championship on TV is pretty great, too.

More Like This
'Workin’ Moms' Season 7 Is Reportedly In The Works! Here’s Everything We Know
Khloé Kardashian Shares First Look At Her Son & His Birth
The Best Movies Airing On Freeform’s 31 Nights Of Halloween In 2022
'The Proud Family: Louder & Prouder' Is Returning For Season 2 On Disney+