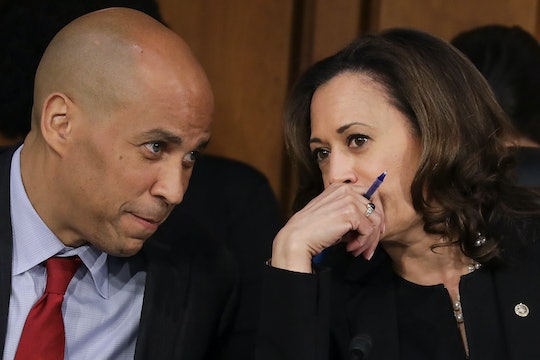 The first debates for the upcoming presidential election are set to get underway in just a few days and if you’re wondering how to watch the first 2020 Democratic debates, don't fret. Between cable and streaming options, there are plenty of ways for voters and concerned citizens to tune in and watch.

The field of Democratic candidates is so packed this year that the debates are being split up into two nights later this week. On June 26 and June 27, each night a group of 10 candidates will take the stage to debate issues like the economy, health care, and reproductive rights. According to TIME, the debates will air on NBC, MSNBC, and Telemundo, from 9 p.m. to 11 p.m. EST each night.

And if you don't have cable or a traditional TV subscription, don't worry: NBC will also be airing the debates over the digital platforms, so you can also look to NBCNews.com, MSNBC.com, Telemundo.com, the NBC News mobile app and those website’s apps on services like Roku, Apple TV, and Amazon Fire, according to NBC News.

That’s the rundown of all the places you can catch the debates later this week, but when you tune in, what will you be seeing and what should you be looking out for?

Democratic National Committee (DNC) Chair Tom Perez sat down with Vox to talk about their goals for the debates and how that differs from what we might have seen in the 2016 Republican debates. “It was all too frequently a circus on the Republican side where they were simply engaged in name calling and distractions that didn’t allow viewers to understand what they stood for,” Perez told Vox reporter Ella Nilsen back in May. “At the end of this debate series. I am confident voters are going to be in a much better position to differentiate candidates from another and figure out who their preferred candidate is.”

That will certainly be helpful, because with more than 20 people in the running, according to The New York Times, it's tough right now to distinguish who candidates even are, let alone know their stances on key issues.

As reported by The Hill, here are the people voters are going to see on stage together this week:

There are also four candidates who didn’t meet fundraising or polling requirements to join the field of debaters, according to Vox.

It’s going to be an important election, so even though two nights of political debates may sound like more than you can handle, it will be worthwhile to plan on tuning in for at least a bit to get introduced to this slate of candidates facing President Donald Trump.