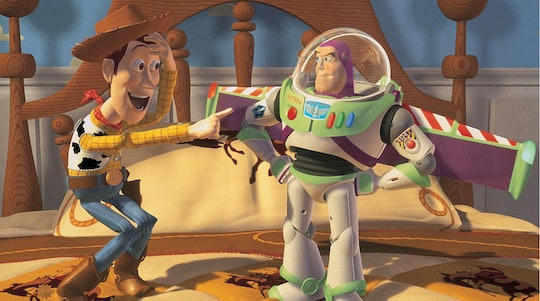 The Toy Story franchise is just over two decades old, but it's already a pretty classic series of movies for kids and adults of all ages to love and enjoy. But with a new sequel coming out on June 21, what's the best way to get yourself and your tribe of littles up-to-date on what's happened up to now in the three previous flicks? Have no fear: Here's how to watch the first three Toy Story movies before the fourth and, presumably, final film hits theaters.

Luckily, there are many ways to find the previous installments in the tale of Woody, Buzz and their gang of toys, between your cable and some streaming services.

As for the first Toy Story — the 1995 original that, of course, introduced us to Tom Hanks as the voice of "leader" of the toys, Woody, along with Tim Allen as the unforgettably confident Buzz Lightyear, and featuring the talents of Don Rickles as Mr. Potato Head — can be found on TV on various days before the new film hits theaters. According to TV Guide's listings for the movie, you can find the OG Toy Story on Freeform on the following dates and times:

The first Toy Story doesn't appear to be streaming on Netflix or Hulu at the moment. However, you can rent it for $3.99 or buy it for $17.99 on Amazon.

Now, moving on to Toy Story 2, the further adventure of the squad when Woody gets kidnapped, which also memorably added Joan Cusack as the voice of cowgirl Jessie. According to TV Guide, the 1999 flick is also airing on Freeform after the first film on the following dates:

Finally, there's 2010's Toy Story 3, which was the one about when the toys were mistakenly packed up and sent to a daycare center as Andy is getting ready for college, as IMDB summarized.

Luckily, Toy Story 3 is available to stream on Hulu, however you will need the STARZ add-on to watch it, which comes at an additional $8.99 for your subscription. And like the first two movies, Toy Story 3 is also available on Amazon: you can rent if for $3.99 or buy it for $17.99. Or you can watch it for free on Amazon with a 7-day trial of STARZ.

You can also watch Toy Story 3 on TV, if your cable subscription includes STARZ. According to TV Guide, the movie is showing on STARZ on the following dates and times:

As for the new installment, as CNN reported, Tom Hanks told Ellen Degeneres that he and Tim Allen discussed the emotional impact of the series coming to an end, saying it was a "tough one" to say goodbye to after all these years and memories. After all, both actors have been involved with the beloved franchise since 1995.

In Toy Story 4, the end to the franchise, Hanks' character Woody — along with the old gang including Buzz, Rex, Slinky Dog, Hamm — is determined to find Forky, a new character, after he escapes, according to the film's IMDb page. And in keeping with the nostalgic vibe of completing the series, as USA Today reported, veteran comics including Betty White, Mel Brooks, and Carl Reiner lent their vocal talents to the new project.

I personally can't believe that this iconic series is finally coming to an end, it's such a special franchise and one I've always loved showing to all my kids over time. But, fortunately, you still have time to get your kiddos caught up on the earlier versions before this franchise is a wrap. Toy Story 4 hits theaters nationwide June 21.