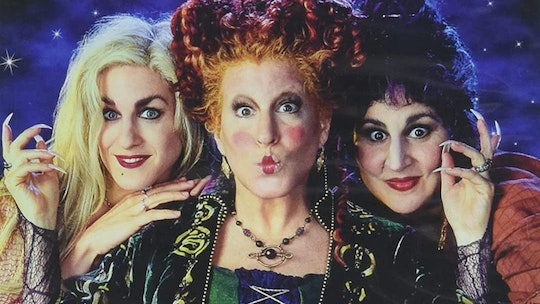 Bette Midler Gave Us A Peek At The 'Hocus Pocus' Reunion — Here's How To Watch It!

After 27 years, the Sanderson Sisters are back for a reunion you won't want to miss. Bette Midler announced that she's reuniting with fellow Hocus Pocus stars Kathy Najimy and Sarah Jessica Parker for a one-night only reunion to benefit the New York Restoration Project. But how can you watch the Hocus Pocus reunion and catch the Sanderson Sisters back in action? You'll need a ticket to attend this virtual event.

"Your 3 fav witches — @sarahjessicaparker @kathynajimy & ME — are returning for 1 night only," Midler announced Sunday via a post shared across both her Instagram and Twitter accounts. "'In Search of the Sanderson Sisters' is the best thing to happen to #Halloween since Hocus Pocus + Reese's Pieces."

While many of the details surrounding Midler's one-night only, star-studded event are being kept hush, hush, she's promised it will be fun for Hocus Pocus fans of all ages.

Tickets to this virtual event cost $10 and can be easily purchased from the New York Restoration Project website. When purchasing you'll be prompted to enter an email address, where you'll receive a personalized link granting you access to the event as well as information on what other fun Midler has prepared leading up to the show.

Midler, Najimy, and Parker will return Oct. 30 as Winifred, Mary, and Sarah Sanderson, a trio of evil witches from the 1993 cult classic Hocus Pocus who inadvertently brought back to life one All Hallow's Eve when virgin teenager Max Dennison lights the Black Flame Candle. But the Sanderson Sisters aren't the only Hocus Pocus trio reuniting for this one-night event.

The show is essentially a virtual take on Hulaween, an annual fundraiser Midler hosts to raise money for the New York Restoration Project, a non-profit organization she founded in 1995 to revitalize green spaces in New York City's underserved communities.

Hosted by Elvira, Mistress of the Dark, In Search of The Sanderson Sisters begins Oct. 30 at 8 p.m. EST and is expected to run for one hour. The show will never be broadcast again, so be sure to snag your ticket now.