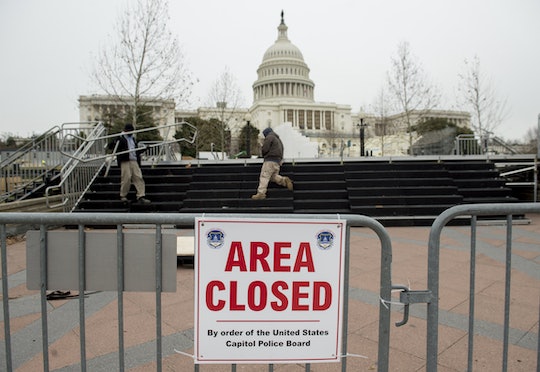 How To Watch The Inauguration

The U.S. Presidential Inauguration, where Donald J. Trump will be sworn in as president (yes, it's really happening), will be held on Friday, Jan. 20. For those of us who won't be making the trek to Washington D.C., there are plenty of ways to watch the historic day unfold from afar. You might be wondering how to watch the inauguration, especially if you don't have a TV. Fear not, there are plenty of options that don't involve trying to find a friend with cable.

The inauguration marks the transition of power from one president to the next, and is one of the most important days in a president's tenure. The president-elect takes the oath of office, is sworn in, and gives their inaugural address to the people of the United States. It's the first time that the nation sees the new president in full presidential-capacity. It's also when the new vice president is sworn in (in this case that's Indiana Gov. Mike Pence), and the new duo leading the country is made official.

Other than the swearing-in ceremony, there are lots of other things that happen throughout the day. A welcome concert, parades, parties and a glamorous ball, national prayer service, and wreath-laying at Arlington National Cemetery make for a busy day.

The coverage of the inauguration will be plentiful, with all major news networks expected to cover the events on their channels. But if you don't have a TV and can't tune in, there are plenty of live streams you can tune into instead:

While it's pretty unlikely that you could still get tickets, members of Congress usually have a certain number of tickets to give to constituents, so you could always call your senator. Alternatively, you could also call your senators to oppose Trump's agenda, the appointments of several of his cabinet members, and/or the repeal of Obamacare, all of which have been calls to action put out in the weeks that have elapsed between the election and the inauguration.