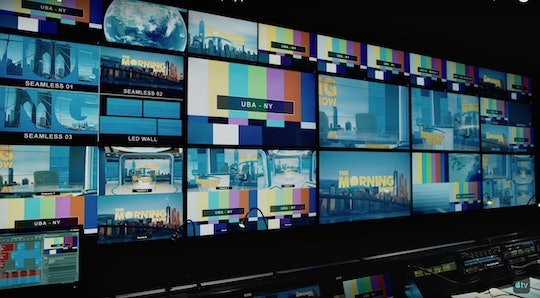 Apple TV+ released a teaser for its highly anticipated upcoming series, so I know you need to know how to watch the The Morning Show. Who would dare miss a chance to watch Reese Witherspoon, Jennifer Aniston, and Steve Carell battle for morning show glory on a fictional set, am I right? Apple is a notoriously secretive company, but I have the answer for you.

Apple TV+ will launch in Fall 2019, presumably just in time to compete with network TV show premieres. It will feature original TV shows, movies, and documentaries and subscribers "will enjoy inspiring and authentic stories with emotional depth and compelling characters from all walks of life, ad-free and on demand," according to a press release about the service. You'll be able to stream Apple TV+ content on all Apple devices with the new app, of course. But to compete with other TV streaming services the app will also be available on competitor devices like Smart TVs, Roku, Amazon Fire TV, LG, Sony, VIZIO, and more. No exact dates for these integrations were announced, but the earliest non-Apple users will be able to stream content on one of their devices is Spring 2019.

The wait is as frustrating as is the fact that Apple won't release the price of the service until closer to its debut. All I can do right now is focus on the clues I do have. The Morning Show trailer may only be about a minute, but it's a really heavy minute that indicates the show will be focusing on the darker side of producing a morning news show. The teaser only shows a tour of the show's offices with short audio clips from Aniston, Carrell, and Witherspoon's characters.

Though it's hard to tell what's going on in the show's plot, it definitely seems like there's going to be a certain amount of rivalry happening. "I am a journalist, I can feel when the world needs me," Carrell can be heard saying in the trailer above. All clips are out of context, but the next clip might be a rebuttal of that quote because Aniston says, "Guess what? America loves me."

Witherspoon's character seems more focused on the seriousness of the job. “I’m just here to deliver the news to America. That’s all I ever wanted to do,” she says in one audio clip. And in another, “I think they want to know the person behind the anchor. They want to trust that the person who is telling them the truth about the world is an honest person.”

Apple is keeping pretty mum about The Morning Show (and all of its other series) but at the event announcing Apple TV+, Aniston said, “Through the prism of those under-slept, over-adrenalized people in front of and behind the camera, we take an honest look at the complex relationships between women and men in the workplace, and we engage in the conversation people are a little too afraid to have unless they’re behind closed doors."

I'm going to need Apple to release more details soon because planning my fall TV schedule is a job.