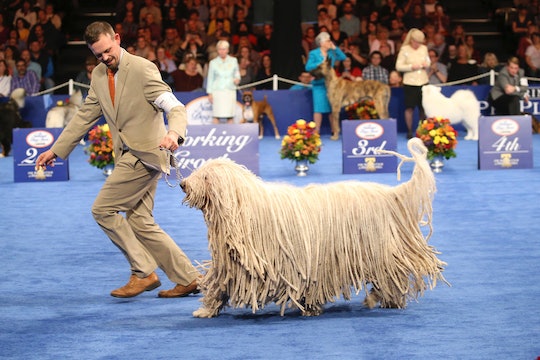 Here's How To Watch The 2018 National Dog Show

Westminster gets all the attention, but stateside, the National Dog Show is keeping our collective blood pressure as a nation down this Thanksgiving. Whether it's a time-honored tradition with your family to tune in after the Macy's Thanksgiving Day Parade, or you're just desperate to put on a cute distraction, you may be wondering how to watch the National Dog Show on Thanksgiving 2018. Here's a quick run down of all the places you can catch it!

First, the National Dog Show airs at 12 p.m. on Thursday, Nov. 22 on NBC, right after the Macy's Thanksgiving Day Parade. You can also live stream the event via the NBC Sports app. An encore presentation of the show will air on Nov. 24 at 8 p.m. This is the National Dog Show's 17th year, and the past two years have served up its highest ratings ever. In fact, after this year's show airs, you can tune into NBC Sports to catch a marathon beginning at 2 p.m. of every National Dog Show from 2013-2017!

Returning to host this year is author and Broadway star John O’Hurley (of Seinfeld and Dancing with the Stars fame), along with commentary by American Kennel Club-licensed judge David Frei. NBC Sports correspondent Mary Carillo, best known for her Olympics hosting, will report from inside the ring, while Olympic figure skaters-turned-pop cultural commentary icons Tara Lipinski and Johnny Weir report from backstage as digital contributors.

Two new breeds are joining the event for the first time this year — the Grand Basset Griffon Vendéen and Nederlandse Kooikerhondje — bringing the total number of breeds showcased to 192. Over 2000 dogs walk the National Dog Show ring, so maximum capacity cuteness is expected. This year's Best In Show stands to inherit the title from a 3-year-old Brussels Griffon named Newton, who took the top honor last year. And, of course, there's a philanthropic social media element to the show this year, too. According to NBC:

From Nov. 9-25, for every unique post shared on Facebook, Twitter or Instagram that includes @Purina and #DogThanking, Purina will donate $1 (up to $25,000) to Tony LaRussa’s Animal Rescue Foundation Pets and Vets program. This amazing program helps pair shelter pets with veterans coping with PTSD, traumatic brain injuries, anxiety and other service-related challenges as they transition back to civilian life following their service.

Contrary to popular belief, National Dog Show doesn't tape live — all those pets and owners are presumably at home enjoying their Thanksgivings and watching themselves on TV, too. Rather, it took place this year at the Greater Philadelphia Expo Center on Nov. 17 and 18, hosted by The Kennel Club of Philadelphia. The National Dog Show remains one of the only "benched" dog shows, meaning dogs entered into the competition must be on hand for the entirety of the event, so that judges and spectators alike can walk around and look at them. (By contrast, in "unbenched" shows, dogs only have to be present for judging.)

Luckily for all of us, there are plenty of chances to tune in.