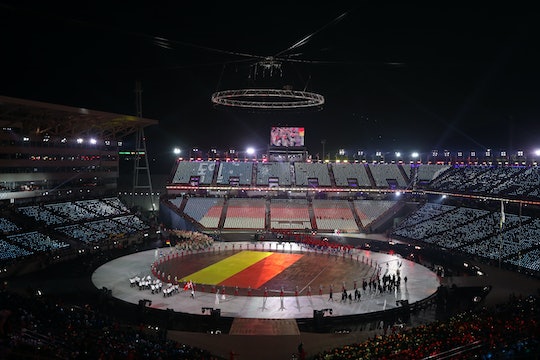 How To Watch The Olympic Ceremony Without Commentary, Because It's Kinda Distracting

The Olympics opening ceremony is always a spectacle, no matter what. Every two years, you can tune in to see the host country tell the story of their culture and highlight the beauty of their nation. But watching the Olympics on TV, with commentary from the sometimes-annoying NBC newscasters, tends to be a little distracting. So if you were wondering how to watch the Olympic ceremony without commentary, you might be able to find a stream sooner or later, commentary-free.

Sure, Katie Couric is an inspiring journalist and TV news personality that has worked very hard to get to the place where she is today — commentating on the Olympics throughout the next few weeks. But you can recognize Couric's hard work and not necessarily enjoy her commentary at the same time. Let's be real, it is hard to pay attention to the story line going on during the opening ceremony when someone is making observations that the audience can clearly take away just from watching the show.

Couric had people cringing, not only about her commentary, but the fact that she said, on live television, that her own daughter couldn't stand being in the same zip code as her. You didn't have to go far on Twitter to see that people were not happy with the commentary made during the opening ceremony.

If you had to suffer through the commentary during the opening ceremony, there is a reward for doing so. It was revealed during the broadcast that you can watch the opening ceremony, in full, without the commentary on NBC's Olympics website starting on Saturday. You can also tune into NBC's website for more Olympic coverage, without commentary, since there are so many sports to cover and not enough time or TV channels to catch it all.

The NBC sports app will also feature a glimpse at the parade of nations, according to NBC, with the event's natural sound (the sound of the crowd, rather than the commentators). So if you prefer to use your phone over your computer, you can access the commentary-free stream on all of your devices. And I can't blame you for wanting your stream to be free of the anchors' voices.

But, if you're unable to access a stream on the NBC app or Olympic website, the highlights from the opening ceremony are already on Twitter. So if you prefer to get your Olympic coverage in highlights or small doses, then turning into Twitter is probably more your speed.

If you really can't find a stream or video from the opening ceremony — whether it be on Twitter or on YouTube, your computer and phone both have mute buttons and they work wonders. Turning your phone or computer on mute is just as effective as watching a stream without commentary — you might not hear the music the athletes are parading out to, but at the same time, it really is just all background noise.

It's completely understandable if you didn't tune in to the opening ceremony to hear commentary but instead watch the performances and see the beauty of South Korea. A lot of people tuned in to do just that. People shouldn't feel guilty for seeking out another alternative live stream without the commentary or commercials that come with watching it on NBC. You're definitely not alone.

Luckily, the Olympics only happen every two years, so you don't have to tune into this commentary every day. Couric's comments were worth putting up with at the end of the day to watch the Olympics happen for the first time in two years. But thank goodness there are alternatives.