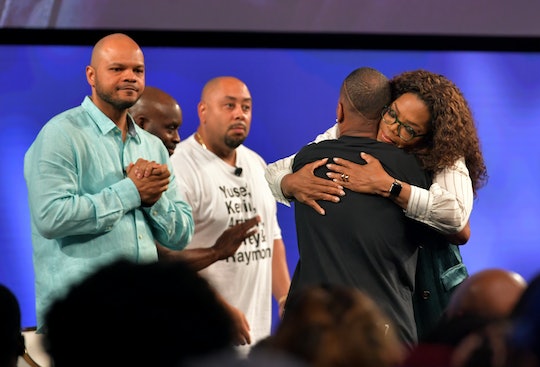 Ava DuVernay’s Netflix series, When They See Us, is based on the true story of the Central Park Five — a group of black and Latino men who were wrongfully convicted of raping and assaulting a white jogger in 1989. Now, 17 years after their exoneration, the five men are talking to Oprah Winfrey about their experiences. If you’re planning to tune in, here’s how to watch the Oprah When They See Us special.

Oprah Winfrey Presents: When They See Us Now premieres on Wednesday, June 12 at 10 p.m. ET on OWN and Netflix, so you can tune into either source to watch. As reported by The Oprah Magazine, Oprah will interview Antron McCray, Kevin Richardson, Yusef Salaam, Raymond Santana, and Korey Wise and talk to them about the circumstances that led to their convictions and how these injustices can be prevented now. DuVernay will also sit down with Oprah to discuss the impact the series has had.

When They See Us depicts how the Central Park Five were arrested, coerced into giving false confessions, wrongfully convicted, imprisoned, released, and then eventually exonerated for the rape and assault of 28-year-old Trisha Meili. While the series follows the group’s experiences with the justice system, it also highlights the emotional trauma and pain they and their families suffered through the decades-long ordeal.

When talking to Variety ahead of the interview, DuVernay revealed that all five men were excited to finally be able to talk to Oprah about their experiences. “At one point, one of them had said to me a couple of years ago during the research period, that when they were young, they’d wished that they could just get to Oprah,” she told the outlet. “[They thought] if they could get to Oprah and tell their story, maybe then people can hear their side because they knew how powerful she was, how much people listen to her. And it didn’t happen at the time they were incarcerated, they were guilty, people threw them away, and now it is their time. And so the fact that they get to sit down with her and finally tell her — her specifically– their story is so emotional to me, so moving.”

In a sneak peek released by Netflix, Oprah asks Richardson how it feels to be a part of the cycle of injustice and racism that is plaguing the country. “You know, here we are, 30 years later, not too many things have changed,” he says. “We’re all connected, we’re just a modern day Scottsboro Boys. It’s all the same thing, so I’m so happy and ecstatic that we can start the conversation now, and make sure there will never be another Central Park Five, and make sure we have the platform to make sure of that.” He goes on to tell her that he believes the series “needs to be watched,” no matter how painful it is, to ensure that “things change now.”

Oprah is one of the most insightful and compassionate voices in the world, and seeing her sit down with these men to hear their stories will surely be compelling. You can tune in to OWN or Netflix on Jun. 12 to catch the special.