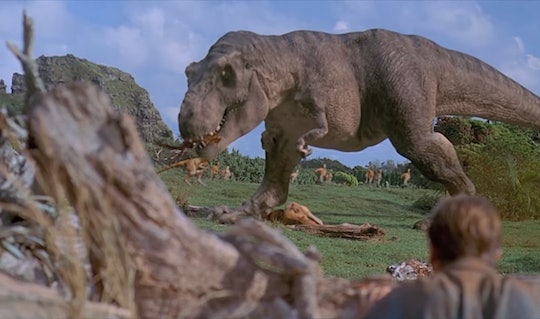 Here's How To Stream All 3 Original 'Jurassic Park' Movies

By now, you've probably seen Jurassic World: Fallen Kingdom in the theater, and re-watched the first Jurassic World so many times, you're feeling as burnt out as Claire must have felt running around in those high heels. If you and your kids are itching for more dinosaurs, why not kick it old school and go back to where it all began? Here's how to watch the original Jurassic Park movies, because they definitely still hold up. OK, to be fair, the CGI in 1993 is not quite as crisp as the stuff they're putting out these days, but just try to suspend disbelief and remember how amazing it looked when you first saw it. As for the kids, they probably won't even notice.

And remember, not all of the effects are digital. Mental Floss has a nice breakdown (as well as some behind the scenes videos) but many of the dinosaurs we grew up with were puppets, robots, costumed humans, animatronics, or miniatures brought to life with stop-motion animation. All told, there's only 6 minutes of CGI effects in the the entire 2-plus hour original Jurassic Park. You can probably spot the difference if you look really carefully at this iconic scene of the Gallimimus herd:

That's right, both Timmy and the log were completely digital, without even having the benefit of Andy Serkis in a mo-cap suit. I'm kidding. It was the Gallimimuses. But the T-Rex was awesome, huh? You're damn right, she was. And whether you believe that she was the real hero of the of the movie, or incredibly patient human Dr. Ellie Sattler (I mean, Ellie saved all the other humans, but T-Rex saved Ellie), it's time to return to Isla Nublar and ask yourself, not for the first time, Why the heck didn't these people learn their lesson?

It drives me crazy, too, but honestly, if they did learn, there wouldn't be any more dinosaur movies, and nobody wants that. So to get started, re-watch the original Jurassic Park movies, a series that's so scientifically out of date, they thought dinosaurs were reptiles (and inexplicably, that frogs were, too). Unfortunately, it's not available to stream for free on Netflix, Prime, or Hulu right now, because supply and demand is a pretty simple concept. But you can rent or buy a digital download on Amazon, iTunes, Google Play, or YouTube. The prices are all pretty similar, but if you have access to more than one of the services, you can save a few bucks by shopping around.

You can buy the first Jurassic Park for $9.99 on iTunes, or use any of the other three services to pay a dollar less. You can also rent it for $3.99 on Amazon, as well as YouTube, but Google Play is charging only $2.99. Marvel at the water trembling as the T-Rex approaches. Cheer on Lexi as she confidently "hacks" into the park's computer system, because what '90s tween didn't know Unix? Roll your eyes as Dr. Ian Malcolm and Dr. Alan Grant get in a pissing contest over Ellie instead of worrying about the fact that they're on a tropical island filled with monsters, and the only thing keeping them safe is the stability of the power grid (how you doin', Puerto Rico?).

Next comes The Lost World: Jurassic Park, which is a confusing title for what we all think of as "The Second Jurassic Park." That's the one where viewers are introduced to Compsognathus, a little featherless chicken that's so precious, you won't even mind when they all team up and eat you. Also, Ian Malcolm is back with a gymnast daughter, because you have to have a child on dinosaur island or else the stakes are too low, and Vince Vaughn is in it. Remember him? YouTube sells the movie for $12.99, while the rest charge $9.99. Google Play has the cheapest rental price at $2.99; the others charge a buck more.

Now, let's bring it all home with the most irresponsible babysitter on earth: Ben Hildebrand, who takes his girlfriend's 12-year-old son parasailing over Isla Sorna, the secondary dinosaur island. Guess what happens. No, they don't take some lovely photos and go home to have a hearty lunch. They wreck there, and poor Dr. Grant gets tricked into rescuing the dopes. Also, Téa Leoni! So '90s! Yeah, yeah, it came out in 2001. I don't care. It was still very '90s. The price points for Jurassic Park III are the same as The Lost World; $9.99 to buy everywhere but YouTube, and Google Play rents it for $2.99.

You can also buy all three movies as a bundle on YouTube for $39.99, but buying them individually will save you five bucks, so I don't recommend it. Alternatively, if you bring the popcorn and candy, you're all invited to my house for a marathon.