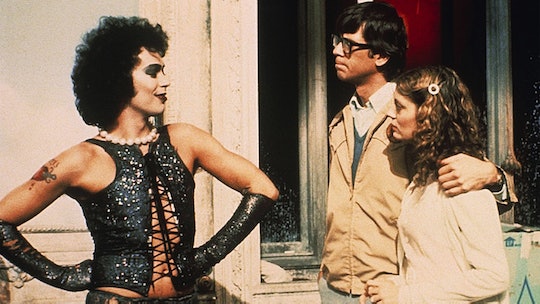 How To Watch The Original 'Rocky Horror Picture Show,' Because FOX Is Bringing It Back

The remake of The Rocky Horror Picture Show is premiering tonight on FOX, and it certainly looks impressive. Though the new adaptation isn't live like FOX's past TV musicals, it boasts a seriously talented cast, including Orange is the New Black's Laverne Cox as the iconic Dr. Frank-N-Furter, and former Nickelodeon and Disney stars Victoria Justice and Ryan McCartan as straight-laced couple Janet Weiss and Brad Majors. But as much as we're looking forward to the new version's debut, we can't help but feel nostalgic for the unmatched classic. If you're wondering how to watch the original Rocky Horror Picture Show, you're in luck because there are actually quite a few options.

Unfortunately, at this time, there don't appear to be any free, legal options for streaming the classic movie. The original 1975 Rocky Horror isn't currently available on any of the standard streaming services, like Netflix, Hulu, or even HBO GO – though, if you have patience and are one of the relative few Netflix subscribers that still have its DVD plan, the movie is available to rent that way. Not even RedBox has the DVD yet, so if you're angling to get your hands on a physical copy of the cult-classic movie-musical without buying it, Netflix DVD is the way to go.

If you want a physical copy of your very own to keep forever, Amazon offers the DVD or Blu-Ray version for as low as $6.99.

So, if you want to relive Tim Curry's "Sweet Transvestite" in all his glory, you'll have to cough up a few dollars. But c'mon, in the spirit of Halloween season, it's totally worth the relatively small investment.

Of course, this is Rocky Horror we're talking about – still in limited release over 40 years after it initially debuted, it's the film with the longest theatrical run of all time. The most well-known way to see the movie (for the first time or for the hundredth) is to attend one of any number of midnight showings if a theater near you is playing it. Most of the midnight showings are interactive experiences, where there's a "cast" of Rocky Horror devotees who act out the action as it's happening on screen and encourage audience participation. This Rocky Horror official fan site has a search function allowing you to find theaters near you who are still airing the movie.

Whether you think tonight's FOX remake lives up to or disappoints the original, keep in mind there are still plenty of ways to revisit the classic movie. Rocky Horror lives on!