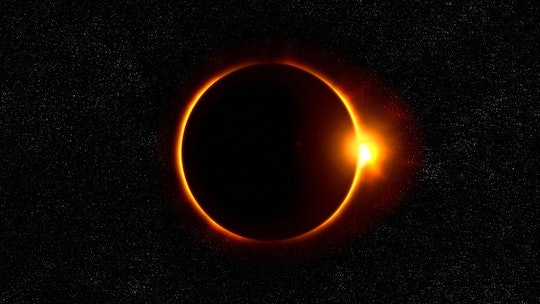 How To Watch The Solar Eclipse Safely, Because Watching Carries A Huge Risk

Unless you've been living under a rock (or just aren't as much of a space nerd as I am), you have probably heard about the upcoming total solar eclipse. As cool looking as it may be, staring at the sun is generally discouraged. So, here's how to watch the solar eclipse without, you know, burning your retinas to all heck.

A total solar eclipse is an eclipse in which viewers are in the center of the moon's shadow when it hits Earth. During this type of eclipse, the sky becomes very dark. Only a small portion of the population will be in the correct location to view the event, but, fortunately, North America falls within the moon's shadow this time.

Considering the Earth hasn't experienced a total solar eclipse since 1918, the one on Aug. 21 will likely draw a large crowd. In preparation of such a massive audience, the big brains at NASA released a handy how-to guide for watching the 2017 solar eclipse. The event is only safe to look at with the naked eye once the sun is completely covered by the moon, but eclipses are a slow process that leave plenty of room for error. Follow these safety tips to avoid injuring the seriously sensitive tissue in your eyes.

The easiest way to view the eclipse is through a solar viewer or filter. There are a number of viewers for sale online, ranging in price and sophistication. Through a quality device, the sun can be viewed at any point during the eclipse.

It is important to keep in mind that any homemade viewers or standard sunglasses are not safe to use during the eclipse — regardless of how dark the lenses are. The American Astronomical Society (AAS) has provided a helpful list of "Reputable Vendors of Solar Filters & Viewers" that provides a number of manufacturers and authorized dealers of eclipse glasses. While it may be tempting to save a few bucks and build your own, the potential damage to your unprotected eyes is worse than being zapped by Agent Jay's Neuralyzer. Besides, everyone looks cool in eye protection.

In addition to recommending a pair of sick sun shades, NASA also advises against viewing the eclipse through the lens of a camera, telescope, binoculars, or any other optical device — even while wearing your viewers. If you are considering using a solar filter with any of these devices, NASA suggests consulting an expert to ensure that the filter is functioning properly and attached to the correct part of the optic.

If you're not interested in buying some special eclipse eyewear, you can still watch the eclipse via the "pinhole projection method." To view the sun this way, simply follow these very technical instructions from NASA:

Cross the outstretched, slightly open fingers of one hand over the outstretched, slightly open fingers of the other, creating a waffle pattern. With your back to the sun, look at your hands’ shadow on the ground. The little spaces between your fingers will project a grid of small images on the ground, showing the sun as a crescent during the partial phases of the eclipse.

Another option is what I like to call the chlorophyll-ter:

Just look at the shadow of a leafy tree during the partial eclipse; you'll see the ground dappled with crescent Suns projected by the tiny spaces between the leaves.

No one loves a good astronomical event more than I do, but no space magic is worth your eyesight. Follow these safety guidelines and you'll be well on your way to watching the incredible, rare event.