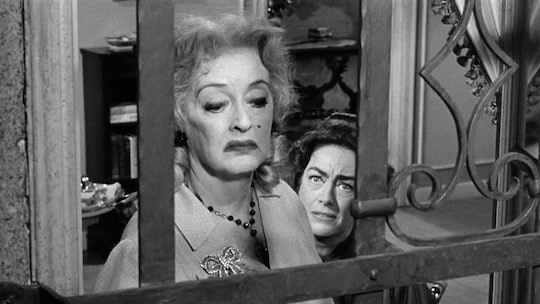 'What Ever Happened To Baby Jane?' Is A Must-See

Ryan Murphy's newest anthology series follows legendary feuds and the first season begins with the iconic hate that existed between two of Hollywood's best actresses, Bette Davis (Susan Sarandon) and Joan Crawford (Jessica Lange). These rivals costarred in the 1962 horror flick What Ever Happened to Jane?, which was based on the novel by the same name. While Murphy's new show, Feud, focuses on what happens behind the scenes during filming, the viewers may be interested to see the actual film itself. If you're one of those people, here's how to watch What Ever Happened to Baby Jane?, so you can see the real-life stars in action.

Unfortunately, the classic isn't available on any streaming services, however you can rent the film from Amazon Video or iTunes for the very low price of $2.99. You can also buy it for $9.99 or if you would like a hard copy you can get the DVD for $12.99 or the Blu-ray for $14.99. Either way, it's not too difficult to get your hands on the film.

What Ever Happened to Baby Jane? is a cult thriller classic and a favorite among those who love horror films. The movie follows Baby Jane, played by Davis, a former child star who torments her paraplegic sister, Blanche, played by Crawford. The sisters live in their decaying Hollywood mansion and apparently Baby Jane isn't the best person to be taking care of her sister. As you can imagine, scary events begin to take place and just by seeing the trailer I know I'm too chicken to watch it.

The film, which runs over two hours long and was directed by Robert Aldrich, who filmed other horror flicks of the time, was so well done that it even earned Davis an Oscar nomination.

If you're like me and shy away from scary films, you don't have to worry about that with Feud. The show doesn't spend too much time on the actual film and even goes well past it and into what happens after the project is made, all the way to the Oscars, which found Crawford without a nomination. (Any guesses on how well she took that?)

Along with Sarandon and Lange, who play Davis and Crawford respectively, the cast for the show also includes notable stars, such as Judy Davis, Stanley Tucci, Kathy Bates, Sarah Paulson, and Catherine Zeta-Jones. Just like most of Murphy's shows, Feud is set to be an entertaining and drama-filled adventure, and you definitely won't want to miss it.