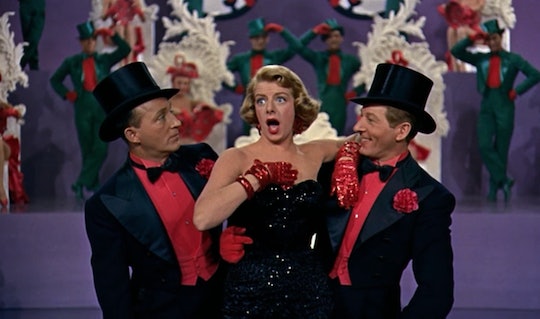 Here's How To Watch 'White Christmas' This Holiday Season

With Christmas only a week away, there's no better time to start watching your favorite Christmas classics, and that includes White Christmas. The music-filled 1954 classic is a joy for kids and adults alike, and whether you watch it every year or have never seen it before, it's definitely worth a viewing. Here's how to watch White Christmas this holiday season, so you can relieve all the holiday fun.

If you have Netflix, you're in luck. White Christmas is currently available on the streaming service, so all you have to do is log in and watch whenever you want and as many times as you want. If you don't have Netflix, don't worry. There are a few other alternatives you can pursue. You can rent the movie on Amazon Video or iTunes for $3.99 or buy the film outright for $7.99 on Amazon and $9.99 on iTunes. You can also purchase the DVD from Amazon for $10, which is a pretty good deal.

If you've never seen White Christmas, it follows a successful song-and-dance team made up of Bob Wallace and Phil Davis, who become romantically involved with the Haynes sisters, Betty and Judy. The couples then team up to save the failing Vermont Inn for their former commanding general.

The movie stars Bing Crosby as Bob, who sings the classic song "White Christmas" we've all come to know and love. However despite popular belief, Crosby actually performed that song for the first time 13 years prior to the film's release. Also starring in the film is Danny Kaye as Phil, Rosemary Clooney as Betty, and Vera-Ellen as Judy. And yes, Rosemary was related to George Clooney; she was his aunt and unfortunately, died in 2002 from lung cancer.

White Christmas continues to be a holiday favorite for many, which shouldn't be surprising since it's filled with romance, comedy, and great music. One of the original songs for the film, "Count Your Blessings Instead of Sheep" was even nominated for the Academy Award for Original Song in 1955. The dance numbers are also one of the major highlights of the film and that's because they're amazing. I never get tired of watching them.

Additionally, Vera-Ellen was such a skilled dancer that she was one of the youngest Rockettes to ever dance at Radio City Music Hall, starting when she was just 18 years old. She was also one of the smallest, coming in at only 5'4" tall. Lastly, the icing on the cake to the whole film, are the incredible costumes, especially for those big dance numbers. It shouldn't be surprising then that the famous designer, Edith Head, was the costume designer for White Christmas. Over the course of her career, she received 35 Academy Award nominations for her costume design and won eight of them, the most of any costume designer in history.

Clearly, White Christmas had a lot going for it and all these elements came together to make an incredible movie that deserves to be seen again and again.