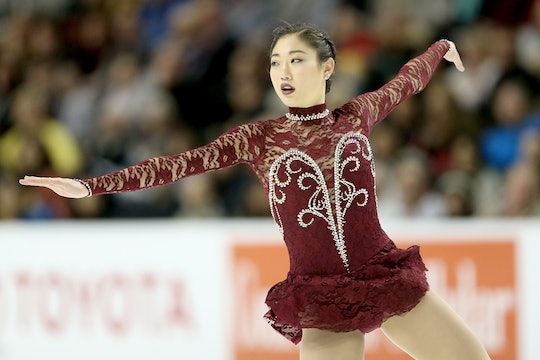 How To Watch Women's Figure Skating During The 2018 Winter Olympics

Although there are actual figure skating competitions happening on a regular basis, the Winter Olympics is the one time when everyone tunes in to watch, not just the die hard fans. Every aspect of figure skating is awesome but many of us, myself included, are partial to the ladies. From their gorgeous costumes to the bits of sass they incorporate into their routines, not to mention their spins, they're just so much fun to watch. So if you're wondering how to watch women's figure skating during the 2018 Winter Olympics, you've come to the right place. Luckily, it'll be pretty easy to see all of the incredible routines.

You can find all of the various times the women's figuring skating will be on below. I've gone ahead and bolded the Ladies' programs to help make them standout. As you can see once you look through everything, they'll be performing many times throughout the Winter Olympics, so you'll have quite a few opportunities to see them all in action. In fact, there are even encore viewings, which I've also provided below. Please keep in mind that these are all listed in Eastern Standard Time.

Competing for the U.S. this year are 18-year-old Karen Chen, 24-year-old Mirai Nagasu, and 19-year-old Bradie Tennell. Both Chen and Nagasu started online campaigns in the hopes of raising enough money so their families could travel to PyeongChang, South Korea to see them compete in the Olympic games. Both families surpassed their goals of $10,000 and $11,000, respectively, so it looks like not only are these ladies going to the Olympics, but their families will be there to support them as well.

All three of these participants are incredibly talented, but it's relative newcomer Tennell that most people have their eye on this year. Tennell just won her first national skating title at the U.S. Championships in January; Nagasu and Chen won silver and bronze, respectively. However, this was also a big moment for Nagasu, who was on the Olympic team in 2010 but lost out to Ashley Wagner for a spot on the team in 2014. Also, it's fair to note that Chen was battling a virus during this year's national championships and still came out in the third place; she won the national title back in 2017.

Thus, each one of the skaters are ones to watch, but do they have what it takes to secure a U.S. gold medal in figure skating this year? It's hard to say, but the competition will definitely be tough. Hopefully, the U.S. will bring their A game and win that gold.