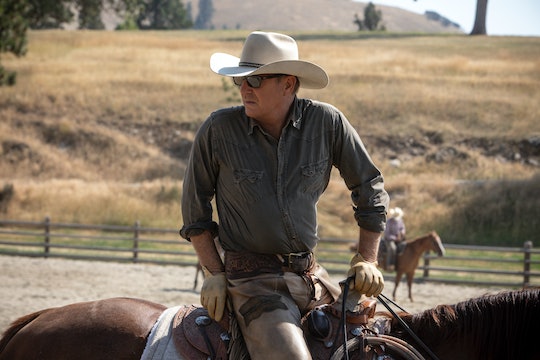 Fans Are ~So~ Excited About 'Yellowstone' Season 2

It's time to go back to the ranch. You might be wondering how to watch Yellowstone Season 2 and catch up with the Dutton family. Well, you're in luck. Yellowstone Season 2 premieres Wednesday June 19 on Paramount Network. According to Esquire viewership of cable series is declining, but people love a western almost as much as they love zombies because it's still the "second most-watched cable series of the year" behind The Walking Dead.

Part of the reason it's so loved is authenticity. First of all, there's no better actor I can think of to play a rancher than Kevin Costner, who stars as head of the family, John Dutton. But the heart of the show may be its location, so it's really important that the show is mostly filmed in Utah. The Duttons live in Montana, and the cast and crew did spend a few weeks there filming Season 2. At least the show isn't making fans think they are on a ranch surrounded by animals when the actors are on a soundstage in New York or Los Angeles.

Filming in Utah is one of Costner's favorite parts of the job. “I just love being out there. It could be my favorite,” he told The Salt Lake Tribune. “I love that area. I love the history. And it doesn’t take long to get out in the country.”

It might seem surprising that a show about a rancher's quest to keep his land at all costs would connect with people in 2019, but there's a really important reason why people love John — he's no hero. “John has done some really questionable things. He’s committed murder, in his own way," Costner told the Tribune. Fans of the show know that he hasn't literally killed anyone himself (yet) but Costner called his character's actions “sanctioned” murder. “I think he’s crossed the line and his family members have crossed the line. So it’s a big melodrama.”

That's putting it quite lightly if you ask me. One of the situations the Dutton family will still be dealing with on Season 2 is that John's youngest son Kayce (Luke Grimes) avenged his oldest brother Lee's (Dave Annable) murder by shooting and killing his brother's killer. Oh, yeah, and the man happens to be Kayce's brother-in-law. That cannot be great for his marriage.

“I knew this was going to be a pretty dramatic and intense job,” Grimes told The Salt Lake Tribune. But he signed up in part because of his admiration for the show's creator, Taylor Sheridan. “I’d seen Taylor’s other work, and I was a huge fan ... There’s a tone. There’s just always pressure and there’s always an energy — a kinetic electricity to it," he said. It's one of the best feelings in the world to work with someone you admire. With a cast led by Costner and the whole team led by Sheridan, it's no wonder the show is so popular.

There is plenty of dramatic ground for Yellowstone to cover in Season 2, but beyond that the future of the show is uncertain mostly because Costner was hesitant to sign up for a TV show in the first place, and has a very practical reason for continuing on.

“I thought we were going to do one season, and at some point it was wanting to be a long-form series. I had to make a decision, and I certainly wouldn’t want the show to fall apart by me stepping aside,” Costner said in the Tribune.

I'm just going to enjoy Yellowstone while it's on and be thankful the wait for Season 2 is over.