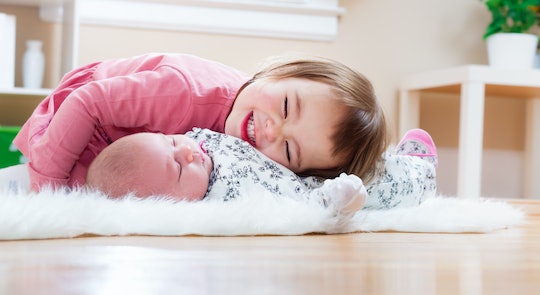 How To Your Get Baby To Nap With A Toddler Around, According To Real Moms

When my daughter was born, my son was 3 years old, which meant he was not the quiet sort. He loved watching loud cartoons and stomping like a dinosaur, so getting his baby sister to nap wasn't easy. Somehow, I did it, but I'm still not entirely sure how to get your baby to nap with a toddler around. If you have young children, you're probably trying to figure it out, too.

When I approached other moms and nurses about how to manage this epic feat, I got many sarcastic responses. "How are you at witchcraft? Are you against bribery? Have you tried not having a toddler?" Those aren't the most helpful of responses, but they do illustrate just how difficult a task it is to accomplish. Children are loud by default. They're just so full of energy and joy, and that's not easily caged.

I learned that there are a few tricks to put in your arsenal, though. While none may be as good as a whatever Hermione could come up with, they might just work for a spell.

The moms I spoke to all had one thing in common with what they were saying, and that was "do whatever it takes." Naps are a crucial part of infant development. The American Academy of Pediatrics noted that while babies tend to sleep on-and-off all day and all night, infants 4 months and up need 12 to 16 hours of rest per 24-hour day, including those naps. Apparently this is the time the building blocks start to click together and work while giving their body the downtime to do it. It decreases risk of obesity, developmental issues, and allows the baby the time they need to shut down.

According to Kidspot, routine is key. If you can make nap time a routine for both your toddler and your baby, you're more likely to succeed. Maybe your toddler only gets to watch endless videos of kids opening toys on YouTube while their sibling naps. Maybe that's your toddler's snack and color time. It could be that your baby's nap time gets to be special mommy-toddler dinner prep time, and your toddler gets to help. Consistency breeds constancy.

Thea Jackson, 34, tells Romper that what worked for her was pure bribery. "Harrison (almost 4) got to watch basically whatever he wanted while Sapphie (almost 2) slept. If that meant 90 minutes of Daniel Tiger, I let him watch it. We were all happier for it, even if I can sing every song on that show."

Chloe Renault, 29, tells Romper, "I let my toddler help put the baby to sleep. He sings her a song, sometimes there's a dance involved — it changes. Either way, it helps him feel like he's a part of getting to put her to sleep, and that makes him feel invested in the outcome. It helps for at least 45 minutes before I give in and give him the bag of Goldfish to keep him quiet."

According to The Baby Sleep Site, the holy grail of this scenario is getting your toddler to nap at the same time as your baby. I would love to meet the parent who has successfully accomplished this and pull her apart for all her secrets. The only way this would've happened in my house is if I took up sorcery on the weekends or perhaps considered selling off part of my soul. But if you can get this to work, you are blessed beyond riches. Know that.

It's a lot of juggling, bribery, and probably many, many Goldfish crackers, but it is possible. There's no scientific way to guarantee any outcome, but for me, I let my son curl up next to me on the sofa while my daughter napped on the rug (I swear, it was the only place she'd nap). He got to play with my hair, eat hummus, and watch too much television, but I just didn't care. There are probably vitamins in hummus somewhere, right?

More Like This
What To Do If Your Toddler Keeps Taking Off Their Diaper At Night
The Best Travel Tips For Solo Parenting
Even If Your Baby Sleeps Better in Your Bed, It’s Still Not Recommended
Winter Travel Tips For Families
What Parents Are Talking About — Delivered Straight To Your Inbox