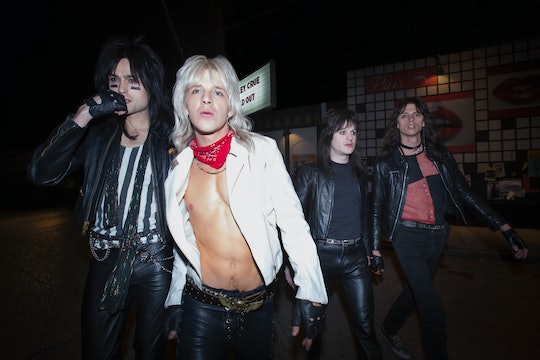 You don't have to be into rock music to appreciate what happens on and off the stage. The Dirt — which arrived on Netflix March 22 — is the perfect example of '80s hair band in its heyday as it follows the hijinks of mega-bad boys, Mötley Crüe. Yes, that Mötley Crüe. While The Dirt isn't a full-on documentary, the fictional biography follows stories about lead singer, Vince Neil, lead guitarist, Mick Mars, bassist, Nikki Sixx, and drummer, Tommy Lee on their rise to fame. Naturally, having heard all of those names in the headlines through the years, you might wonder how true to life The Dirt will be. Depends on how much you've heard about Crüe.

The Dirt is an adaptation of the '01 bestselling autobiography cowritten with Neil Strauss, The Dirt: Confessions of the World's Most Notorious Rock Band. It's quite literally, the band's true confessions in (probably) more detail than you're looking for. They didn't become one of the most notorious rock bands in history for nothing. If none of this is ringing a bell, Mötley Crüe is mostly known for hits like "Dr. Feelgood," "Girls, Girls, Girls," and "Kickstart My Heart," though it's their lives off stage that have garnered more tabloid fodder than anything. That is what Jackass director, Jeff Tremaine, pulled from to create the film's scripted source material. So yes — what you'll see in The Dirt is based on those stories in the book, which is autobiographical. Don't let the scripted lines and actors fool you — these events are very much part of Mötley Crüe's history.

Due to the graphic content, it's taken awhile to get this project off the ground. Borat director, Larry Charles, first attempted to draft an NC-17 version of The Dirt years back, but that didn't work out. By the time Tremaine gave The Dirt a go, he'd still never scripted anything before. His work is mostly contained to the likes of Jonny Knoxville hilarities including Jackass, Bad Grandpa, and Rob & Big, among others. As far as what kind of job he did on The Dirt in terms of how realistic and close to the pieces pulled from the book, he told Ultimate Classic Rock he was nervous about the band's reaction."That's when it really hit me — the responsibility I had for telling these guys' story, when I was bringing a cut out to Tommy Lee’s house to show to him and Nikki Sixx."

Tremaine said in that same interview, in order to get this story right, he had to first get approval from the band members, obviously. "Past that, its just been us diving in and using the book as the source — getting the story right and now its going back out to them and I want to hear what they say. So we will collaborate and I feel very much a real responsibility that I’m telling their story. They have to have approval. They’ve provided a great road map in the turn. So all those stories are fair game." Some of the stars involved are Machine Gun Kelly (Colson Baker), Erin Ownbey, Iwan Rheon, and Douglas Booth, among others.

It sounds like The Dirt is a mostly true interpretation of the book. If that's your kind of thing, you know what to expect going in. If not, Netflix has other options that won't let you down.