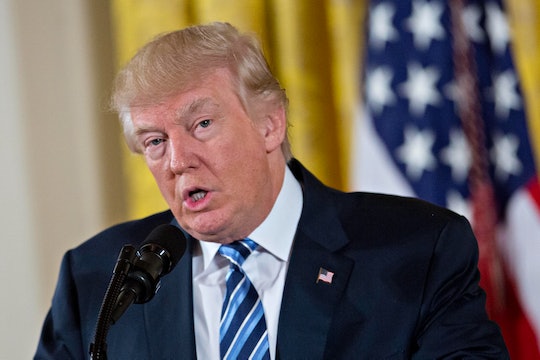 In these first days of the new Trump Administration, Americans are left to wonder what the next four years might look like. President Donald Trump made many promises over the course of his campaign, ranging from banning Muslims from entering the U.S. to re-imagining the country's trade policy. And while there are lingering questions about which of those he intends to pursue, there's one group of Americans who desperately need his help—mothers. How will Trump affect working mothers? A closer look at his campaign promises offer some clues.

There are three areas of policy Trump has focused on that are of particular interest to working mothers in the U.S.: health care, paid leave, and child care. These three areas get to the heart of how mothers are able to participate in the workforce and still take care of their children. In other words, after deducting the cost of child care, health care, and the time off necessary to have a baby, can you still afford to go to work?

That's not the position working mothers should find themselves in. It keeps talented women out of the workforce and puts incredible financial pressures on families. There's even a term for it, it's called the "motherhood penalty" according to New York Magazine. A recently study from The Harvard Business Review found that, despite the cost of child care and health care for working mothers, their salaries were found to drop 4 percent for each child they have, New York Magazine reported. Worse yet is the discrimination women face in the workplace for being "the least committed" and a "flight risk" because they were considered by hiring managers to be more likely to leave a job due to family pressures, New York Magazine added.

This seems to be an area where the president and federal government could take some action to level the playing field for the more than 31 million mothers with children under the age of 18 in the U.S., according to the Department of Labor. So what clues has newly sworn in President Trump offered about his plans?

Trump has made his interest in repealing and replacing Obamacare among his first acts in office crystal clear, and along with Congressional Republicans, he has already taken preliminary steps to dismantle the healthcare law, according to CNN, and with it many of the protections it offers working mothers. From no-cost contraception to considering maternity care as essential to any insurance plan, Obamacare has several provisions built in to protect working mothers and help them access the care they needed. In fact, according to the Obamacare Fact website, before the Affordable Care Act, only 12 percent of health care plans being sold on the open market covered maternity care. Obamacare made that coverage mandatory.

Now that the Trump administration is doing what it can to dismantle the law with no real proposal for a replacement, according to CNN, working mothers stand to lose many of the protections the Affordable Care Act provided. And without details of a replacement from the Trump administration, women are left to wonder what their health care could look like following an Obamacare repeal. Trump's Administration hasn't responded to Romper's requests for comment regarding a healthcare replacement and what it would include for mothers.

According to a proposal led by Trump's daughter Ivanka, the new administration promises to focus on reforms in paid leave policies that help working mothers, including, according to Ivanka Trump's Wall Street Journal op-ed from September, six weeks of paid leave guaranteed by the federal government. The problem with this proposal is that it would only apply to women, as TIME reported, which assumes women are the only ones providing child care in the family, and could encourage additional workplace discrimination like the earlier mentioned "motherhood penalty," since women would be the only employees offered paid leave.

Ivanka Trump is also taking on the issue of child care with proposals including tax deductions for child care expenses, rebates for lower-income families through the Earned Income Tax Credit, Dependent Care Accounts, fewer regulations on child care providers, and incentives for business to provide on-site child care, according to Ivanka's op-ed laying out her proposals.

There is plenty to get excited about for working mothers if the Trump administration, led by First Daughter Ivanka Trump, follows through with these proposals.

The bottom line is that working mothers in this country need a break — and soon. Trump could make a whole lot of voters happy by delivering. About 31 million of them, to be exact.