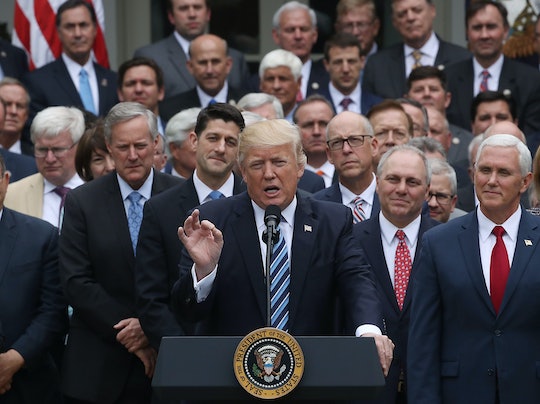 How Trumpcare Could Affect Kids With Disabilities

There is no denying Trumpcare will have a major effect on everyone. The Congressional Budget Office projected that, in the first draft of the American Health Care Act, 21 million people would be uninsured by 2020. Insurance will become more expensive, less comprehensive, and harder to obtain with the AHCA — and it's well on its way to becoming a law. Before this happens, parents need to know how Trumpcare could affect kids with disabilities, because this will have a major impact on them, too.

Most children have insurance — if a child's parent has insurance, then their child has insurance, too. Under Obamacare, children with disabilities can't be denied coverage for having pre-existing conditions, which means their shots and monthly check-up appointments are typically covered by their insurance plan and provider. But this could all change if the AHCA is passed in Senate. The AHCA will affect kids with disabilities in major ways, by potentially raising the cost of insurance for parents, making it difficult for them to afford and continue treatments, which in turn, has a major effect on parents. The AHCA also makes drastic cuts to Medicaid, which will have a huge effect on education for kids with disabilities in schools, according to The New York Times.

Public school districts rely on Medicaid, the federal healthcare program for those who are low income, to provide anything from "special education services" to equipment in the classroom, according to The New York Times. If passed, the AHCA will cut Medicaid funding by $880 billion and put a cap on funding for children. This will have a major impact on children with disabilities who have ever received any kind of help or support through these school programs. "Those who suffer the most are those who need health care the most, including the 37 million children who rely on the program," the American Academy of Pediatrics said in a statement.

A child with a pre-existing condition they've had since birth can directly impact their policy and whether they qualify due to their condition, according to The Huffington Post. Some parents just won't be able to afford the cost of health care for themselves and their child with a disability, due to states charging higher rates for people with pre-existing conditions or charging more for essential health benefits.