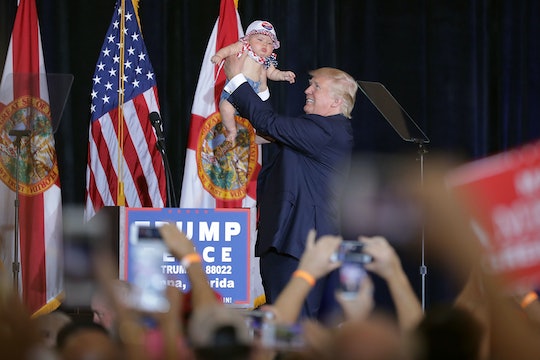 An Expert Weighs In On Trump's Child Care Plan

President Donald Trump and his administration have collectively changed their tune on a number of legislative issues in response to criticism from both parties. Yet whether any amended or replacement plans will ultimately be better than the original versions remains to be seen. One area of express interest to parents are the tax credits pertaining to child care expenses. While it can be difficult to navigate the changes, here's how Trump's child care tax plan will really affect parents, according to an expert.

On Wednesday, Ivanka Trump said that “In over half of American households, the single largest expense is child care, even exceeding the cost of housing," according to The Washington Post. It's unclear what data, if any, Trump was citing in the statement, and while there are certainly many American families who may identify with it, there are plenty who would be left out of the conversation. Existing data doesn't factor in a situation, for example, when a parent has not returned to work or ultimately quit their job because the cost of child care was too expensive. In such cases, that household would report no child care expenses. While technically true, that leaves out a crucial narrative on the tough decisions families may be faced with if they can't afford child care.

President Trump's initial plan for child care included tax credits that primarily benefitted higher-income families because of how they were set up. In situations where parents can deduct child care costs from their income tax overall in order to get a tax break, those who have low or no income are not going to see as big of a benefit. As this was a primary criticism of the first plan, Trump's amended version includes a Child and Dependent Care Credit that would allow working parents to cut a maximum of $2,100 from their tax bill each year to account for child care spending. For low-income families, benefits from the Earned Income Credit (EIC) could be capped at $1,200 toward child care expenses.

The Trump Administration has also been particularly fond of savings accounts, including those for healthcare expenses. A similar concept — a Dependent Care Savings Account — would also be made available to families so that they could make pre-tax contributions to be used toward child care expenses. As is the same issue with healthcare savings accounts, though, for low or no income families, there would be no money to put into such an account.

An Expert Weighs In

Ajay Chaudry, a visiting scholar at New York University, has researched and written extensively on the subjects of child poverty, well being, and development. He's the author of Putting Children First: How Low-Wage Working Mothers Manage Child Care and co-author of Cradle To Kindergarten: A New Plan To Combat Inequality, which explores the need for better access to early childhood care and education. In the U.S., it's not just that there's a disparity in access, but in quality. Depending on where a family lives, the cost and quality of the child care that's available to them will vary.

Chaudry, who received his M.P.P and P.h.D. from Harvard University spoke to Romper via email about what Trump's plan for child care will mean for parents and children:

Trumps’ plan mostly helps affluent parents with it’s tax write-off for child care—doing almost nothing for parents in middle- and lower wage jobs. These are families forced to rely on low-cost arrangements, as it’s all they can afford. These are the families who really need help the most – but they would receive little or no benefit. Taken alone, this proposal would only would only worsen the inequalities of opportunity in early childhood, which are already at a crisis point. It really does nothing about the main problem. More than 70 percent of the benefits would accrue to families with annual incomes over $100,000 according to analysis by the Tax Policy Center.

Why is this important? For one, Chaudry points out that, while "child care is a basic need," it's also "a significant financial burden for all working parents." Good quality care is often scarce, and access to it is very much dependent on what families are able to pay. Chaudry says:

Since child care is a basic need and very expensive, families have to make do what they can afford, which is often not very good quality, and families spend a whole lot of money for what they can get. Families with children under five spend an average 11 percent of their incomes on child care, and those with incomes below $50,000 spend 22 percent. These are families’ actual out-of-pocket expenses for the mediocre and often unstable care they can find and afford. In the U.S. there is very scant support for this basic need of families with young children. Only 15% of those eligible for child care subsidies receive them, and the most that families currently receive from tax credits is $600 per year, a sliver of the actual amount families spend.

That being said, Chaudry's critiques of Trump's plan aren't presented without possible alternatives, which he and his team have been researching for years:

Instead of further stacking the deck against middle and low-income families as the Trump tax plan for child care costs would do we propose a child care “guarantee” that provides all families with a child under age five with financial assistance to make good child care affordable.

We suggest two policies that would support this: First, for middle and low-income families with children under age five and earnings below $60,000 (states could choose to make this income ceiling higher), we would guarantee direct financial assistance with families paying on a sliding scale, but no more than 10 percent of their income to access good quality, licensed care and learning opportunities they want to use. Second, we too would expand the tax credit for a broad array of paid care arrangements for families of all incomes, increasing the maximum annual tax credit from $600 to $3,000 and make it refundable for families with limited tax liability.

Chaudry, and others, have also pointed out that if the Trump administration is focused on economic growth and development, the value of investing in children (who are, after all, the future) should not be underestimated.

More Like This
From Captions To Gifts, These Are All The Kindergarten Graduation Ideas You Need
Operation Fly Formula Begins With 78,000 Pounds Of Baby Formula
What Is Monkeypox & Should You Be Worried? Here’s What You Need To Know
Mom Gave Birth On The Side Of The Road... With Her Five Other Kids In The Car