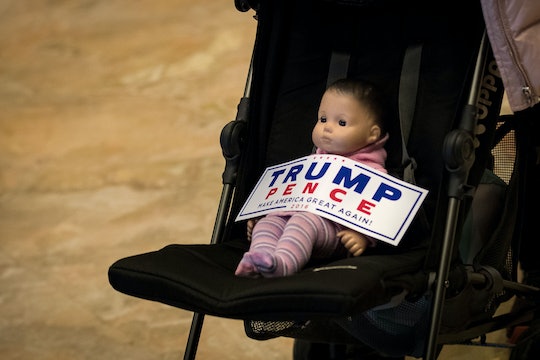 President Donald Trump, a man who has filed for bankruptcy six times, plans to overhaul the federal budget, and citizens are not pleased. People who never gave a passing thought to the federal budget before are now wondering what the new proposal means for them, and the ways in which Trump's budget will affect parents and families are pretty scary. Trump wants to free up some money to increase defense spending by about 10 percent, pay for a wall along the U.S.-Mexican border (the same wall that he insisted Mexico would pay for), and fund a school voucher program.

In order to pay for those, Trump wants to cut funding for many agencies, and completely eliminate funding for 19 programs. All of the cuts could possibly have disastrous consequences. Scrapping funding for the Corporation for Public Broadcasting could mean that PBS is forced to replace Daniel Tiger's Neighborhood and Super Why with nonstop pledge drives, so parents with younger kids are going to have to figure out a different way to keep toddlers occupied while they shower. And weekends will likely be a lot more expensive if he takes away all the funding for the National Endowment for the Arts and the Institute of Museum and Library Services, as he plans to.

Now, that's just the fun stuff. One could argue that we don't need PBS, NPR, museums, or libraries (I'd argue right back, of course, but let's stick a pin in that). It's also theoretically possible that they could all survive on donations, because rich people like planetariums, too, and everybody needs a $120 tote bag, am I right? But there are even more pressing concerns. Here are the other things this budget could ruin:

The Ability To Feed Your Kids

Cuts to the USDA would take $200 million away from the Women, Infants and Children nutrition assistance program, literally taking food out of the mouths of needy children, according to The Washington Post. The McGovern-Dole International Food for Education program would also be eliminated entirely, so kids in other countries would go hungry, too.

The Environmental Protection Agency would be the hardest hit agency by far, per the Post, which shouldn't come as much of a surprise. But the proposal also cuts $250 million from the Commerce Department's coastal research program and eliminates its Sea Grant program. All State Department climate-change programs would be gone, as well as the Energy Star program. NASA would lose its climate change and education funding completely. This is like promising your teen that you'll let them have your car one day, then pushing it into a volcano and handing over the keys. Good luck with that one, kid!

Trump also plans to take more than $9 billion from the Education Department, cutting grants for teacher training, after-school and summer programs, and aid programs for needy students, according to the Wall Street Journal. And then, of course, the rest of the money would eventually get funneled away to private schools due to that voucher plan, and our kids would have to be taught by wolves. I joke because it's preferable to facing reality, of course.

Yes, there's even more! The Department of Housing and Urban Development would lose $6 billion, according to the Post, so even if one decent public school is left standing, many parents won't be able to afford to live near it. Cuts to the Transportation Department mean that they might not be able to get to it, anyway. And of course, school aside, kids need a safe place to live, and roads that aren't crumbling. We can't all afford to shuttle our kids around via private jet.

And Then When They Grow Up...

If kids somehow make it out of this dystopian hellscape and manage to get into college, they're still in trouble, since federal aid for work-study programs are also being slashed. Everyone got a few hundred thousand dollars socked away for their kids yet? No? And after all that, if they still manage to eke out a living, once they're elderly and can't work anymore, Meals on Wheels — also defunded — will no longer be able to help them. Luckily, rich white men still seem to be doing OK, so maybe parents should encourage their children to grow up and marry one, just to be safe.