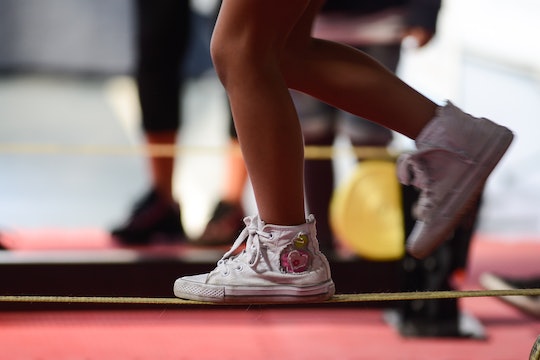 In the wake of President Trump's rollback on protections for transgender youth in U.S. schools, many have taken to social media to protest the decision. These protests go beyond party politics and even civil rights violations: many feel that lives are quite literally at stake. Medical professionals, psychologists, and child welfare advocates have begun to weigh in on the longterm impact, and it's a grim picture. How Trump's transgender memo will affect kids' health & wellbeing is a reality that we all must face — and doctors say the effects are already beginning to show.

In a statement from Physicians for Reproductive Health, Reproductive Health Advocacy Fellow Dr. Diane Horvath-Cosper explained how Trump's decision to withdraw protections for trans youth in schools will have negative and potentially life-threatening ramifications for students:

As an organization that cares deeply about adolescent health, we think it’s unacceptable to reverse a guidance that is meant to protect children who already face significant challenges to their well-being. Transgender children are often rejected by their family and peers, harassed, traumatized and abused, and are at a higher risk for depression and suicide. Discouraging or punishing children for expressing their true sense of identity threatens their health and well-being, and schools have a special responsibility to protect all young people, regardless of gender identity or expression. Children thrive in open, honest environments that foster healthy decision-making. Schools should be at the forefront of the effort to create safe learning spaces for all students, not exposing thousands of children to discrimination.

According to CDC data, suicide is the second leading cause of death in youth ages 10 to 24. For LGBTQ youth, the rate of suicide is four times higher than it is for youth who identify as straight. It's easy to look at statistics — even the most unsettling ones — and forget that there are real lives behind them.

In 2014, a transgender teen named Leelah Alcorn committed suicide after she told her family she was trans, and her mother reacted by telling her that she "would never truly be a girl, that God doesn’t make mistakes", according to TIME Magazine. Alcorn was then taken to a psychiatrist where she was forced to undergo conversion therapy, according to CNN. Although Alcorn reached out for help online, she had limited social supports — including a lack of support at school, where she was bullied. In a suicide note posted to her Tumblr, she wrote that she felt hopeless and alone. The note had been scheduled to publish on her blog after she had already died.

The only way I will rest in peace is if one day transgender people aren’t treated the way I was, they’re treated like humans, with valid feelings and human rights. Gender needs to be taught about in schools, the earlier the better. My death needs to mean something. My death needs to be counted in the number of transgender people who commit suicide this year. I want someone to look at that number and say “that’s fucked up” and fix it. Fix society. Please.

Another transgender teen, Blake Brockington, committed suicide a few months after Alcorn. He had become his school's first transgender Homecoming King, and was an advocate for trans rights. In an interview with QNotes, he said, "Nobody should be scared to be themselves, and everybody should have an equal opportunity to have an enjoyable high school experience."

Brockington's suicide was the sixth reported suicide of a transgender youth in the U.S. that year — and he died in March (three months into the year).

Following the 2016 presidential election, when Donald Trump became the next U.S. president, calls to crisis hotlines within the LGBTQ community surged to unprecedented numbers. Research from Harvard's School of Public Health has shown that transgender youth are more at-risk for depression, anxiety, and other mental illnesses — but that these conditions can be mitigated through recognition, gender-affirming mental health services and support.

Sari L. Reisner, research scientist at The Fenway Institute and postdoctoral research fellow in the Department of Epidemiology at Harvard T.H. Chan School of Public Health, was the research lead on Harvard's study. In the introduction to the research's findings, she wrote about why medical professionals are an important piece of a child's support network:

If a person is not being seen for who they are it can be very distressing. So pediatricians present a very important entry point into care and can get youth who need services to the right place.

Dr. Lin-Fan Wang, a family doctor at Mazzoni Center and a member of Physicians for Reproductive Health’s Physicians’ Adolescent Reproductive and Sexual Health Education Program (ARSHEP) faculty, concurs that the role of healthcare professionals is important. In an email to Romper, she notes that schools have a responsibility to youth that can't be overlooked:

All students need to feel safe at school so that they can focus on their education. As a family physician who provides primary care and medical affirming care for transgender individuals, I have heard directly from patients about how safety at school impacts their physical and mental health. For my young transgender patients, having support from their school and being able to use the bathroom that aligns with their gender means that they can focus on their schoolwork, make meaningful relationships with friends, and have the confidence to go to college and have successful careers. I have also provided care for young transgender patients who experienced bullying at school or went to schools that didn't support their gender identity. I have witnessed how these experiences can lead to depression, anxiety, suicide attempts, and poorer physical health that can be a life-long struggle for patients.

She also illustrates that the long-term outcomes for trans teens who have experienced bullying, discrimination, and a lack of support are not positive:

The teen years can be a hard time for any student – they’re figuring out who they are in the world, and it’s even harder for transgender students who are rejected by their school, family, or peers. Research has proven that transgender young people who experience rejection, discrimination, or verbal or physical harassment at school are much more likely to drop out of school, become homeless, have a harder time finding employment, and commit suicide.

The takeaway is that all adults — parents, teachers, coaches, physicians, and yes — even politicians — have a responsibility to protect youth. For trans youth especially, having affirmation, support, and encouragement will be vital in the months to come. While the ACLU is hard at work, taking discrimination cases to the highest courts in the land, most trans youth will not find themselves in the position to have their story told before a judge. Most will be relying on those around them to help them navigate, to protect them from harm's way, and most important of all: to give them hope.