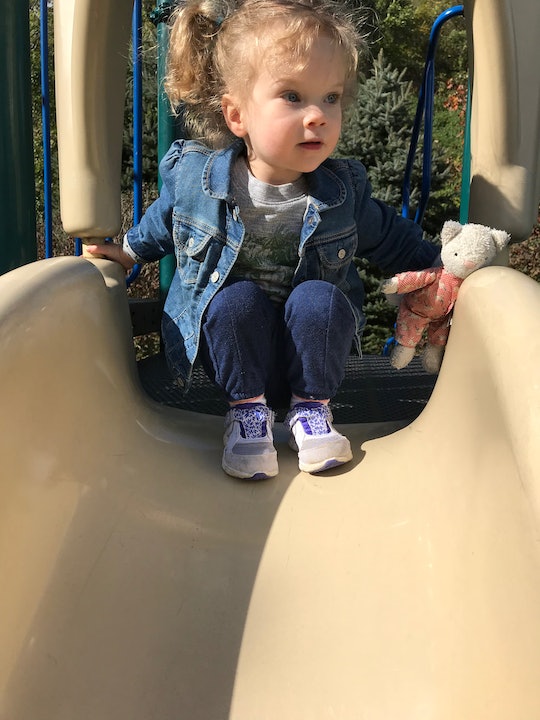 Kitty. He comes everywhere with us and basically lives in the nook of my daughter's arm. He was the unexpected lovey, a stuffed animal that she picked out in a toy store with her daddy. Before we knew it, Kitty was a regular staple at the dinner table and slept pressed against Claire's face each night. I love hearing her tell Kitty she loooves him and wonder if it gives me a glimpse at who she will be as she grows older. But if you're worried about how using a lovey affects your kid later in life or if your little one will become too dependent on their source of comfort, experts say they have answers.

"A lovey can be a child's best friend and most precious possession, but many parents are skeptical of giving one to their child," Caleb Backe, a health and wellness expert at Maple Holistics, tells Romper in an email interview. "While most of this fear is rooted in the potential damage it may cause the child as an adult, a lovey offers tremendous benefits to developing children." Backe explains that a lovey can help kids cope with separation anxiety and "give them the necessary sensations of confidence and safety to try new things, meet new people, and explore new situations."

"Nevertheless, because these children rely so heavily on this external token, there is a chance this dependence may carry over to adolescence and adulthood," Backe says. "There comes a point in a child's development where they must have the self-confidence to approach new things."

But when it comes to encouraging your child to separate from a lovey, experts say you shouldn't rush it. If they are headed off to school, encourage them to leave their favorite stuffed animal or blanket at home with the intention of coming home to "tell" the lovey about their day.

When I was younger and took my favorite teddy bear everywhere, my mom convinced me to leave him at home during school hours by telling me that he had plans with his friends while I was gone. I would come home and she would have him set up with a tea party or "coloring" at my play table, and I was thrilled that the two of us were surviving on our own. P.S. That bear still sits on an armchair in my room.

Some parents have also had success with transitioning their child away from a lovey by sending a photo of their favorite friend with them to school or a friend's house, according to What To Expect. Your child can keep it in their pocket or cubby and feel more at ease about leaving their lovey at home.

But if your child is taking their lovey everywhere, then you are going to need some tips for cleaning it up, right? Yesterday, I watched my daughter at the library as she played with Legos and Kitty was positioned next to her, random kids picking him up to check him out along with all of their germs. A good bath was in order and for us, that means sneaking Kitty out of Claire's arms while she naps. However, some kids do like to be a part of the laundering process. Parents suggested getting them involved by asking kids if they want their lovey to go for a "swim" in the washing machine.

As for whether or not a lovey will negatively affect your child later in life, experts say they're going to be OK. In fact, a lovey can help with separation anxiety and even comfort them when they feel scared. Like my mom says about everything from potty training to my daughter's constant "I want mommy!" plea: "It won't follow her to college." Unless, of course, she's like my brother who took his beloved Milton the monkey to his college dorm room and gave him a spot on his desk. But, that's kind of cute if you ask me.