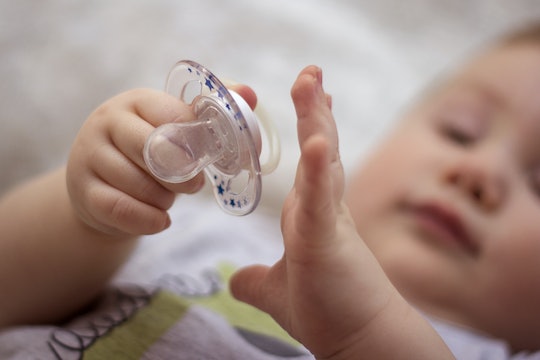 My kids loved their pacifiers. My son especially. For three years, I couldn't put him to bed without sprinkling a bevy of pacifiers about the crib so that no matter where he placed his chubby hand, he came up with a soother. My daughter fell in love with her Wubbanub puppy and frog, and those things were probably toxic by the time we washed them once per week. They both did this for years, and it definitely had me worried about how using a pacifier affects your baby later in life.

Pacifier use is a tricky subject to navigate around. For the past 15 years or so, the general consensus is that the use of pacifiers greatly reduces the risk of infant mortality caused by sudden infant death syndrome (SIDS), as noted in Scientific American. However, coming equally loud across the parental advice megaphone is that it can interrupt breastfeeding, as per the Cochran Library, or that it will generally muck up your child's teeth, according to the American Dental Association (ADA). Pacifiers are one of those cases where many truths are held at the same time, and it's up to the parent to weigh the benefits and possible consequences as they see fit.

My daughter gave her pacifier up pretty easily by the time she was between 18 months and 2 years old. She had a brother who was more interesting, and she'd found the glory of gab. My son wasn't so keen on giving up his soother. In fact, by the time we decided to take it away, he was nearing his third birthday, and holy cow was that a battle. He screamed for long nights and car trips were atrocious — my kid would make himself throw up from the vehement protests. It didn't matter that we were trying to help his speech, already stunted by a developmental delay related to autism. It didn't matter that we wanted his teeth to be straight or for him to find ways to self-soothe. Nope. He was sure that we as his parents had taken a tour in Hell, made a pact with the devil, and had become his evil minions on this earth. Because, clearly, only the truly evil would revoke his unfettered access to Nuks.

There is a lot of research on the consequences of prolonged pacifier use, however, the only real data to be had on short-term pacifier reliance is on how it could possibly decrease the amount of time a baby breastfeeds. However, an Indian study proved this notion false. The use of a pacifier has little to no effect on the duration of breastfeeding or how successful a baby is with breastfeeding, as per the study.

There is a lot more research on how using a pacifier affects your baby later in life if they use one for a prolonged period of time. For most studies, including those completed by the ADA, that means three to four years. Honestly, that's a lot longer than I assumed. The minute my children could walk, there were old biddies coming up to me, offering me unsolicited advice on how allowing my toddler to have a soother was tantamount to child abuse or something similar. There was serious vitriol from some of the would-be advisors. As it turns out, three is the magic age.

One of the most startling bits of research looks at how prolonged use of a pacifier seems to correlate with smoking in adolescence and early adulthood, according to a European study on addiction. Again, it's correlation, not causation, but it makes sense. Let's use me as an example. I used a pacifier for a long time, and after that, I chewed on my hair or my nails. At school, I was a total pencil chewer and pen cap gnawer. At 13, I started smoking. At 21, I quit, but picked up snacking on crunchy crisps. I am highly orally fixated. That's always been the case, and that's what the study looked at. My daughter? She is not. Chewing and mouthing ended for her exactly when it was predicted to end. My son is definitely a pencil chewer. It's so bad, we've taken to giving him buckets of sugarless gum and Altoids to chew instead.

Honestly, I also go through a tin of Altoid mints every four or five days as well. It's a real apple and tree scenario.

As for your child's teeth, prolonged pacifier usage is hostile to good jaw and dentition formation as their adult teeth grow in, according to the American Academy of Pediatric Dentistry (AADP). But that's only after they're 4 years old, and at that point, there are appliances they can employ to deter their use.

For the most part, as per the American Academy of Pediatrics (AAP), it's such a safe activity that they recommend it as a matter of course to prevent SIDS deaths and prevent parents from losing their ever-loving minds when kids can't soothe themselves. So don't feel bad when you realize you've purchased nine thousand pacifiers. You're not alone, and you're not hurting your child.