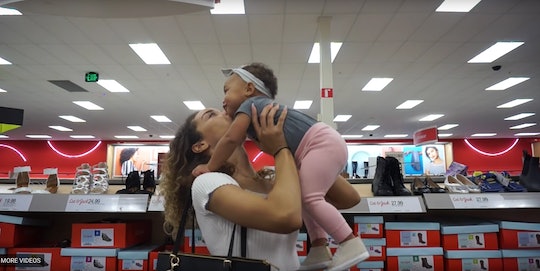 Why Are Millennial Moms So Obsessed With Target?

Most of us can agree that Target is one of the few good things to exist in this garbage world. But no one understands this better than mothers, who know there is a greater meaning to the world that opens up when you pull a rickety red cart out of a lopsided parking lot to begin a shopping adventure. And mothers know *exactly* what it means when someone self-identifies as a “Target Mom.” Target Mom knows what she wants, and what she wants is to live her best life by sipping a latte while she browses seasonal welcome mats and tasteful throw pillows in the home-decor section. Target Mom is a viral meme, a cultural phenomenon, a capitalist spirit animal — you either are one, know one, or aspire to be one.

Mika, a mom of three and avowed "Target Mom" from Utah tells Romper, "I LOVE LOVE LOVE Target. I don't know what it is about it. I have joked with my husband that they must pump something through the air vents to make you happy because just walking in is magical."

The country is riven, and yet Target Mom crosses cultural and partisan boundaries. She is in Atlanta, in Chicago, in Austin, in Burlington, forever prying gingerbread house kits from the hands of her toddler or throwing miniature Hunter boots that are unaccounted for in the budget into her cart. We are all Target Mom.

Target Mom is, and always has been, goals. She practices self-care in the candle aisle and reclaims her time in the Dollar Spot; she values convenience, a good aesthetic, and a better bargain.

Ten years ago, Target was a pleasantly convenient retailer with a popcorn machine; now, moms run Target bargain Instagram accounts with a hundred thousand followers and enlist photographers to shoot styled maternity photos in the diaper aisle. A Buzzfeed Parents parody of a frazzled AF Target Mom has 25 million views and over 300,000 shares. There are 770 pages of themed Target paraphernalia on Etsy.

How did this happen?

Like Jumanji, we have all been ensnared for many years by what is called the Target Curse: the inability to leave a Target without spending under $50. The curse is so widespread that a business journalist wrote an entire book about it.

An urban mother of two tells Romper that her trips to Target when she is out in the suburbs are "a guilty pleasure — I spend way too much on things I don't need."

“We have a game called ‘Target,’” says user Ypsi on parenting board Sybermoms. “You post a list of random things that you bought at Target and everyone has to guess what you originally needed to go in there for. Winner gets a can of tuna. Or they would if it weren’t only a message board.”

It was the subject of one of the first-ever Target memes, posted on a blog called Crappy Pictures in 2012:

After some digging, I traced the feeling back to a 1978 commercial that ends with a shot of a woman, likely a mom, leaving the store followed by ten employees who are evidently trailing her with the rest of her purchases. The image is essentially a meme already:

The Curse of Target has clearly withstood the test of 40 years. Still, moms nationwide continue to call Target things like “happy place,” “second home,” and “mid-week sabbatical in sea of societal chaos.” Can you really say it’s a curse if you leave with your soul recharged? Isn’t that kind of ~priceless~?

The significance of a department store that traffics in bargains and lets you breastfeed in public without anyone calling the police isn't lost on the moms of America.

And anyway, the Target slogan basically explains how a visit works: "Expect More, Pay Less." We've just been reading it wrong — you should expect that you'll come home with more than you planned on, but no worries, because it's all discounted. Also look! You're in an alternate universe where diverse young women with messy buns are the cultural majority.

Target isn't apolitical. The significance of a department store that traffics in bargains and lets you breastfeed in public without anyone calling the police isn't lost on the moms of America. As our wages have frozen, our reproductive rights have been put under assault, and our children's futures have been auctioned off to fossil fuel companies, a place where we can be relatively in charge, feel seen, tote our babies, and wear our LuLaRoes without embarrassment is naturally a freaking haven.

It's something we've actually begun to print out and wear.

Most internet memes and subcultures have a very short shelf life, probably because humans have evolved to have the attention spans of a squirrel. Target Mom’s longevity is the exception, because Target’s model of upscale discount retailing is the exception. You cannot name a more iconic duo than Starbucks + an inventory so vast you could supply an apocalypse bunker.

What is peak mom if not being 'pregnant AF' on a couch in the home-decor section of Target with a Starbucks drink?

Fast forward a few years to 2012 and 2013, when social networks morphed from platforms for innocent status updates into a polar vortex of meme culture. It was only natural that the two great loves of moms everywhere — memes and Target — would come together in holy matrimony. Suddenly, the hills were alive with the sound of appropriate background music and non-fluorescent lighting:

Target Mom had become a unifying principle, something that made us all moms feel like they were understood, connected, important to the universe. Something you'd tag a close friend on.

Things picked up speed again in 2013, when two moms unlocked new levels with their Instagram account @targetdoesitagain, which became so popular so quickly that it was featured on Target’s corporate blog 💯. Moms had essentially turned Target into fan-worship, and were sharing their shopping finds out of the goodness of their own hearts.

It made me briefly wonder what effect this has on Target kids. Turns out they’re already paying homage:

The movement to reclaim the term "basic b*tch" (who is notably a fan of the PSL) was fueled in part by moms. "Basic" had been a putdown cloaked in classism and racism, and the embrace of the label by the women it sought to insult was a clutch move. The pumpkin spice latte is more powerful than ever, thanks to basic b*tches. October is unofficially PSL month. But scorn and condescension toward women, and moms in particular, lives on in our culture.

So it was only natural moms would turn elite scorn for big-box stores and inorganic parenting into a celebration of all their mortal, earth-bound aspirations as women who devote their lives to keeping their kids fed and shod — a task requiring great big shopping carts and biweekly visits. The big red cart became a symbol of their merry keeping-calm-and-carrying-on as moms. If there isn't a Target shopping cart Christmas ornament somewhere on Etsy this year, I will eat my own succulent.

I’d argue that the ubiquity of Target Mom wasn’t truly qualified until four months ago, when Page Miller posted photos from her maternity shoot in a St. Louis Target:

The comments are all some version of “literally same,” or “my sole regret in life is that I didn’t think of this first, god damn it.”

What is peak mom if not being “pregnant AF” on a couch in the home decor section of Target with a Starbucks drink while her overalled child distracts herself with a bag of M&Ms?

She elaborates: “Like my own mother, as I recall from from the days of my youth, I spend at least 60 dollars every time I'm there, load up my car with things I don't need, and finish eating my bag of Target movie popcorn on the drive back home. God I love that place.”

Target Mom is, and always has been, goals. She practices self-care in the candle aisle and reclaims her time in the Dollar Spot; she values convenience, a good aesthetic, and a better bargain.

There’s little more than captures her essence than this clip from Raven Elyse, a Target Mom vlogger, a box of Cheerios and baby nestled comfortably in that iconic red cart:

I’ve had my eye on this stupid little glass bathroom tray for a long time. I’ve waited for it to go on sale and it’s never going on sale… it’s $20 for this thing but I want it. I need it. I think I might get it. Yep, it’s going in the cart. Somebody stop me. Oop, too late.

Girl, no one’s stopping you. And no one ever will.

More Like This
How Do I Date As A Widow Without Guilt?
Molly Yeh Draws The Line At Hot Pockets
Home Reno Culture Makes Me Feel Like I Live In A "Before" House
I’m Getting Dual Citizenship For My Jewish Children, Just In Case.